Naas CBS miss out on the three-in-a-row 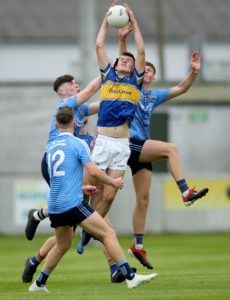 NAAS CBS missed out on a third Leinster ‘A’ title in a row when they were beaten by Luke Dempsey’s St Josephs side in Tullamore today.

Playing with a strong wind in the first half, the Westmeath side dominated the first 30 minutes and should have been more than just two points ahead at half time but Naas battled back in the second half and will feel they missed a chance to at least level the game in injury time.

Devin Hill scored a goal for St Josephs after just 45 seconds of the game but they missed two more good chances in the half. Mikey McGovern kept Naas in touch but no doubt they would have been happy to be only 1-5 to 0-6 behind at the break.

Both sides swapped a brace of points early in the second half but three points in a row, two from Kevin Quinn, put Naas ahead for the first time in 40th minute.

The lead changed hands a couple of times then but St Josephs took a big leap towards glory in the 51st minute when Brandon Kelly converted a penalty after Niall Smullen had been fouled.

Naas’ chances of a comeback were hit when Beirne picked up a second yellow card in the 55th minute but just two points behind, they had their chances to get back level. McGovern missed a free from a good position and then Paddy McDermott fired wide as the game headed into injury time.

The effort put in by Naas finally told in the fifth minute of injury time when Jack Torpey found space to kick two quick points and seal the win.

It was a huge performance from both sides considering the lengthy lay off and even though Naas finished as losers here today, many who played their last game of football will leave with great memories of what they have done over the last three years.