Eye on the past 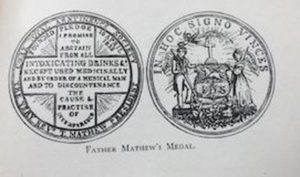 The two sides of the Temperance Medal

IN a recent*Eye on the Past I made reference to Fr Mathew’s Temperance Campaign and his visits to Athy in 1840 and 1842. The earlier visit had been noted in the diary of local man, Michael Cleary, while the second visit was mentioned in the book Footsteps of Fr MathewSince then I have rediscovered a reference to Fr Mathew’s temperance meeting in Athy which I had previously mislaid. That reference was in the Annals of the local Sisters of Mercy whose annalist referred to the temperance meeting held before a large crowd of local people in the ‘commons of Clonmullin’.

Following the publication of the article in which I referenced Fr Mathew’s visits to Athy I received a phone call from Denis Smyth who is one of the many local persons who makes valuable contributions to my ongoing search for the hidden gems and forgotten people of Athy’s past. Denis had three temperance medals which were handed down through the Smyth family and which he has since kindly donated to the local Heritage Centre. One of those medals had been presented to his grandfather, Patrick Smyth, by Fr Mathew at one of the temperance meetings in Athy. Patrick Smyth, who was born in 1832, was a young boy on the occasion of Fr Mathew’s second Athy visit and he would go on to survive the Great Famine which ravaged Irish towns and the Irish countryside between 1845 and 1849. The identity of those presented with the other two medals is not known but it may be presumed that the recipients were other members of the Smyth family. The burnished pewter medals manufactured in their thousands in a Birmingham factory cost 3½ pence each and were intended to be sold at one shilling each at every temperance meeting. We are told that Fr Mathew gave the medals away ‘with a prodigal hand’. Apparently silver medals were also manufactured but were reserved for what were described as ‘distinguished persons who joined the temperance society and priests.’

Returning to the medal it was presented either for a boxing tournament or a football match between Leix and Offaly, both events which were listed as part of the 1939 carnival programme. The boxing tournament was the only competitive event for which the programme named the competitors. These included A. Shelly, T. Hynes, M. Keenan, T. Murphy, J. Conroy, J. Keane, B. Hinds and J. Keenan, all of Portlaoise Boxing Club. T. Smith, C. Lewis, G. Mulligan and M. McKeever represented Phoenix Boxing Club. Locals involved included M. Day, W. Hovington, E. Nolan and P. Vaughan of Ballylinan Boxing Club. I wonder if J. Hegarty representing Catholic Boy Scouts or J. O’Neill, C.B.S. Boxing Club were local boxers from this area? I would be surprised if the 1939 carnival boxing tournament did not have a number of young boxers from Athy as Sydney Minch had started a boxing club in the town in the 1930s.

Athy’s temperance meetings remind me that excessive alcohol drinking in pre famine days was facilitated by the many illegal drinking houses, otherwise called ‘shebeens’ which were a common feature of those times. ‘Shebeen’ is a term which has today been appropriated by top class restaurants and liquor stores, especially in countries other than Ireland. Athy, the home of the Irish malting industry, witnessed the opening of its own ‘Auld Shebeen’ on Thursday 9 July. Intrigued by the extensive building works which commenced in the pre Covid 19 shutdown days I ventured into the ‘Auld Sheibeen’ in William Street before it opened. The public house once owned by generations of the Purcell family has been transformed and extended with style and panache. Great credit is due to Dan Curtis and his wife Edwina for creating a very noteworthy addition to Athy’s hospitality sector.