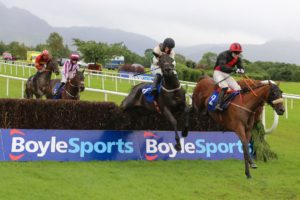 The Peter Fahey trained Peregrine Run on the way to a recent win at Killarney
Photo: Alain Barr/Racing Post

The 10-year-old won for the 17-time for Peter Fahey at Killarney earlier this month and has been allotted joint top-weight of 11st 10lbs with Jett, Jessica Harrington’s sole entry, and The Storyteller, a Grade 1 winning novice chaser and a Cheltenham Festival winner for Gordon Elliott.

Elliott, who has won three of the last four renewals, is responsible for nine of the 35 entries. He could also call upon the Cheltenham Festival runner-up and recent Killarney winner Galvin, Mengli Khan which regained the winning thread over hurdles at Kilbeggan last time and his narrow Midlands National runner-up Three Musketeers.

It’s nine years since Willie Mullins last trained the winner of The Tote Galway and the champion trainer has made six entries, headed by Easy Game, a novice hurdle winner at the Galway Festival in 2018. He just lost out to Faugheen when second in the Grade 1 Flogas Novice Chase at the Dublin Racing Festival in February. Blazer, runner-up in the Guinness Galway Hurdle in 2018 is also among the Mullins entry as is Galway festival regular Robin Des Foret, Royal Rendezvous and Cabaret Queen.

Fifth in the race to Clarcam in 2018 and a winner over the same course and distance just four days later, Sub Lieutenant is one of four entries for Henry De Bromhead, successful with Balko Des Flos in 2017. His exciting novice Spyglass Hill would be an intriguing contender.
Us And Them, Mortal and Early Doors are Joseph O’Brien’s three, while Liam Cusack has his 2018 Guinness Galway Blazer winner Snugsborough Benny which returned to Ballybrit to take third place in last year’s Tote Galway Plate.

Tony Martin won the Guinness Galway Hurdle for the third time in the last six years when the John Breslin-owned Tudor City defeated Due Reward in the race 12 months ago and the pair head the entries for the 2020 renewal a week on Thursday.

Martin was successful with Thomas Edison in 2014 and Quick Jack, another owned by New York-based Breslin, the following year, and Tudor City could bid to become the first back-to-back winner of the Guinness Galway Hurdle since the Noel Meade-trained Pinch Hitter in 1982 and 1983.

Willie Mullins added to the 1996 victory of Mystical City and the success of Clondaw Warrior 20 years later, when Sharjah became his third winner of the Guinness Galway Hurdle two years ago and the champion trainer has made 13 entries this time. With the recent Tipperary Grade 3 Aramon, Diamond Hill, twice a winner at the Galway festival and successful in the Listed Ardilaun Hotel Oyster Stakes on the Flat at Galway last September, last year’s Connacht Hotel Handicap winner Great White Shark and Foveros among his entries, the champion trainer certainly holds a strong hand.

Gordon Elliott counts the Cheltenham Festival winner Aramax, the recent runaway Navan winner Felix Desjy, Mengli Khan, Saint D’oroux and Recent Revelations, third and fourth to Aramax in the Boodles Juvenile Handicap Hurdle at Cheltenham, and The Very Man among his early team of seven as he seeks his first win in the race.

Joseph O’Brien won the Guinness Galway Hurdle with Tigris River in 2017 and his only entry this year is his Grade 1 winning juvenile hurdler A Wave Of The Sea. Charles Byrnes has entered both Turnpike Trip and Wonder Laish while another with two in the race is John McConnell who has entered Play The Game, 11th last year, and Hannon. Hearts Are Trumps was sixth for Des McDonogh a year ago and is also entered.

There are two British-trained entries in the Guinness Galway Hurdle. Fair Mountain could represent Dan Skelton while Olly Murphy has entered Hunters Call which gave him his first major success as a trainer in the Racing Welfare Handicap Hurdle at Ascot in December 2017. The 10-year-old was running for the first time since then when winning at Southwell at the beginning of this month. Formerly trained by Nicky Henderson, Charli Parcs was another to make light of a lengthy absence to score last time out. He was a winner on his debut for the Aidan Howard stable at Leopardstown in March, his first start since in 17 months.

Michael Moloney, Chief Executive of Galway Racecourse, said: “We are delighted to be racing this year for what will be a very different Galway Races. We have two huge pots of €200,000 each for The Tote Galway Plate and the Guinness Galway Hurdle and it is great to see these races supported with strong entries, especially considering we cannot now welcome back the Owners. It is hard to believe we are only a week away and we are looking forward to some great racing.”