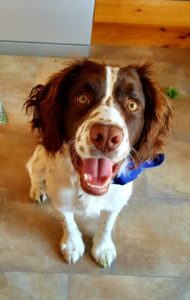 A happy looking Wyatt in his foster home

A MAN convicted of cruelty to a pup was jailed for five months, ordered to pay €1,500 costs to animal welfare, and banned from owning any animals for life at Athy district court sitting in Naas last week 14 July .

The court heard that the pup had been found with a broken leg and had metal and plastic in its stomach and had ingested a nail.

The pup ‘Wyatt’ – believed to have been hit by a car – is now 11 months old and in a loving foster home after making a full recovery, the court was glad to hear.

He was speaking following the conviction of Edward Knee (27), with addresses at Canalside, and Riverview, Athy, who was also fined an additional €250 for not having a dog licence.

“It was cruel, I was wincing here. It was cowardly, trying to backtrack. Talk about ducking and diving, and trying to wriggle out of a difficult position…denying he owned the dog,” said the judge in summation.

He was saved by the timing of the lady guards…who were only in town to do a good deed and make a small boy’s dream come through,” said the judge.

Judge Zaiden was referring to the two members of the Garda Mounted Unit who were in Athy that day to make a wish come true on behalf of the Make A Wish Foundation, for a local boy when they heard the distressed puppy.

“It was a dog with a broken leg. You’ve heard the crying sound from an adult dog when you stand on his toe, but this was a pup. I’ll leave the rest to your imagination,” Judge Zaiden tailed off before sentencing Knee.

Earlier, the court had heard evidence from the two gardaí from the Mounted Unit – Garda Claire Anderson and Garda Orva Keogh – who were bringing their horses to Athy Garda Station on 22 November to meet a very sick little boy.

Both gave evidence that when arriving in to the town along Canal Road with the windows of their vehicle up, they heard the screaming of a dog, and stopped.

They asked a man on the far side who said the dog would be fine, but when they got to the station they reported their concerns to Sgt Walsh.

Gda Seán O’Mahony gave evidence that he knew the defendant, who was residing at a temporary halting site at Canalside at the time. On a visit to the site the next day the defendant said the injured dog belonged to his daughter.

Gda O’Mahony said he found the injured animal cowering under a caravan, and that when he was taking him away, the defendant said he wanted the dog back.

The pup was released into the care of the KWWSPCA’S welfare officer Shauna Byrne, a veteran of over 1,200 animal fosterings over 16 years with the charity.

They found the dog had a fractured right hind leg, was malnourished, had an infected ear and thigh, and “had pieces of plastic and metal in its stomach, and a nail in its intestinal tract”.

“He was very nervous, subdued. He couldn’t put weight on the leg,” she said, before reporting that under her care ‘Wyatt’ had made a full recovery, and was now re-homed.

Defence solicitor Tim Kennelly tried to have the case thrown out on a number of issues, but the judge wasn’t for persuasion.

“I have listened carefully to the evidence. The State has proved its case, and I find him guilty on both counts,” said the judge.

After hearing the sentence, Mr Kennelly immediately lodged an appeal against it, and this was granted subject to the defendant submitting a bond of €750, €500 of it cash.