TWO of Kildare star footballers, Daniel Flynn and Kevin Feely, look like they will have to settle for a watching brief when the Club Championship begins on the first weekend in August. Both players sat out the action as their respective teams began with wins last Saturday evening due to hamstring injuries. 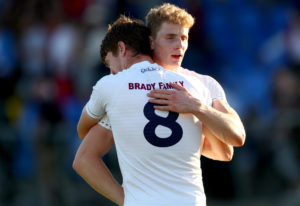 Daniel Flynn and Kevin Feely face a race to be fit ahead of the Club Championship
Photo: ©INPHO/James Crombie

Speaking after his team’s eight-point win over Confey on Saturday evening, Johnstownbridge manager Luke Dempsey confirmed that Flynn is likely to miss first group game against Sarsfields, at least.

“Dan Flynn tore his hamstring, so he was told by the Kildare physio Rob McCabe that it’s a four to six-week injury. It was disappointing the time that it happened. We just hope that his rehab goes well, and he’ll be back maybe after the Sarsfields match.”

Also on the sideline was Athy midfielder Feely. He was on physio duty for his team after suffering a similar hamstring to Flynn and he will be hoping to return in time to play some part of the group stages.

In hurling circles, there was huge disappointment when it was confirmed recently that Gerry Keegan has suffered a cruciate knee injury and he will miss this season. One of the best Kildare players to pick up a hurl in recent times, Keegan has been away travelling in Australia for the last two years but returned ahead of this summer and looked set to feature for Celbridge and Kildare before his injury.

It’s a cruel blow for the player and also his club, who had hoped he could be to the forefront of a Championship challenge, and Kildare as well who have landed a difficult draw against Offaly in the Christy Ring Cup.

By Ian Baker and Robert Cribbin