Tributes paid to Castledermot man to be buried today 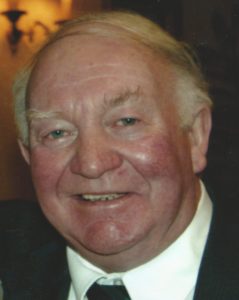 “Tomorrow a true friend of the club will be laid to rest. Michael Byrne affectionately known as Micky the lump passed away on Sunday night.

Mick was a player in both football and hurling for club and in latter years was an accomplished racquetball player.

Micky was also selector and team manager for both football and hurling teams.

In trying to determine a timeline for when Micky served on the committee of the football and hurling clubs as they were once separate it would be harder to find a year that his name didn’t appear in the minutes book. Starting from being a committee member in 1961 he held the posts of treasurer, secretary and pro before finally resting with currently being Vice President of the club.

Despite his many accomplishments on the field it would be fundraising and ticket selling that was to prove to be his super power. He was impossible to say no to and put this skill to great use in the 1980s when a major fundraising campaign to get money to build our new complex and handball court which was completed and opened in 1987 of which Micky was very proud of.

Micky was one of the great characters of Castledermot well known all over the county. There was not one aspect of the club that was not touched by him and the club is where it is today due to people like him. We extend our sincere sympathies to all his family. It has been our absolute priviledge to have known him, may he Rest In Peace.

“Everyone at Castle Villa was saddened to hear of the passing of Micky “The Lump” Byrne yesterday morning. Micky is a character that we will be speaking about in the town for years to come. His wit and his love for the GAA made his company a pleasure to be in. We extend our sympathies to all of his relatives and loved ones, especially his sisters Maisie Breslin, Trish Proctor and Kathleen Still (USA). His brother-in-law Tony Proctor and also his nieces and nephews including Villa club secretary Alan Proctor.”

Michael’s funeral will take place at midday today in the Church of the Assumption in Castledermot. Restrictions are in place due to the Covid-19 restrictions but those who like to leave a message of condolences for the family are invited to do so at https://rip.ie/death-notice/michael-mickey-the-lump-byrne-castledermot-kildare/428921