At Seapoint Golf Links earlier this week, Lauren Walsh,  who played alongside Leona Maguire, shot a magnificent gross 65 (seven under) to win the fourth Irish Scratch Series. Speaking after the event she said “I played really solid today, gave myself plenty of chances and rolled in a few nice putts. It was great to get to play alongside an LPGA player like Leona and we had a really good time out there.” 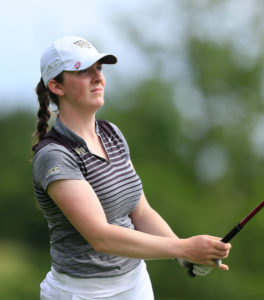 The Series will continue to take place between Seapoint Golf Links and the newly named “Palmer South” at the K Club.  Both courses are in superb condition, giving players the opportunity to test their golf at the highest level.  The finale will be held on the Ryder Cup Palmer North Course on 31 August 2020.

Flogas has announced the extension of its sponsorship of the inaugural Irish Scratch Series following its successful launch in June 2020.  Over 350 elite amateurs and golfing professionals snapped up the chance to take part in the tournament, designed to give players their first taste of competition following the COVID-19 lockdown. It is unique in that it allows male and female golfers to compete together for the same prize.

The Flogas Irish Scratch Series is now continuing weekly until 31st August 2020 culminating in a finale at the K Club. Organisers GK Events and PR plan to launch a new Autumn/Winter Series in September to run weekly until the end of the year on different golf courses around Ireland.

The finale will be held on the Ryder Cup Palmer North Course on the 31st of August 2020.

John Rooney, managing director, Flogas Ireland, said “The Series has been wildly successful and tapped into the strong desire for a tournament like this amongst the golfing community. As a company, we have a long and rich tradition in looking after the energy needs of the many golf clubs and their members throughout Ireland and are delighted to continue with support by sponsoring such a popular and well-regarded competition.”

Flogas also supports the Irish golfing fraternity with preferential energy rates for clubs and their players.

The organisers, GK Events and PR  announced the remaining dates and venues:

3rd August       No Event due to Bank Holiday Weekend

They also announced an incredible Order of Merit prize of a €1,000 Skechers Golf Voucher which can be spent on the fabulous range of Skechers Go Golf shoes and apparel available to both Ladies and Men.  The winner of the order of Merit will be the player who has the lowest five gross scores over the nine Summer Series events.