Ruby picks out ten to watch at the Galway Festival

ALWAYS one of the highlights of the Irish sporting, the Galway Festival will have a very different feel to it this year as it takes place behind closed doors. Still, there will be some classy horses on display and Kildare’s Ruby Walsh has picked out ten of the best for you to keep an eye out for. 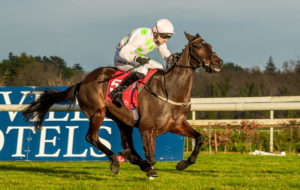 Ruby Walsh has picked Sharjah as the class act of the Galway Festival
Photo: ©INPHO/Morgan Treacy

It’s looking like he’ll run in the amateur riders’ handicap (Connacht Hotel Handicap) on the first day of Galway. He ran really well when Billy Lee rode him at the Curragh over Irish Derby weekend. He ran a lovely race to finish fourth that day and his previous run before that was when he was second to Epatante in the Champion Hurdle in March. He’s won a Galway Hurdle so we know he handles the track and since the Curragh, we’d be hoping that he’s improved fitness-wise. He’s got a really big chance and you’d have thought that Patrick is going to ride him. Of all of Willie’s runners over the seven days of Galway, he’s the one I’m most looking forward to seeing. He’s the best horse we’ll be running all week and I’m a sucker for class!

We’ll have a few horses in the big amateur handicap on Monday and Sayo is another who could line up. He ran really well in the apprentice derby at the Curragh last month when he finished second to Tonkinese. Sayo came home really well that day and while he won his beginners chase at Galway, he’s a horse who probably didn’t excel over fences. That run over 1m4f at the Curragh the last day was really encouraging and we think the way that he came home, the step up to 2m on Monday will really suit him. He’ll need luck to get into Monday’s race but wherever he runs, he’s one to keep an eye on.

He’s entered all over the place during the week but the 2m4f novice hurdle on Thursday might be his cup of tea. He’s still a novice so he still qualifies for that race and he’s had the benefit of a run on the Flat at the Curragh. He’s in good form and he’s definitely improved from his run in the Curragh a few weeks ago. If he lined up in that novice hurdle on Thursday, he’d be of interest there for sure.

He’ll be one of Willie’s runners in the Galway Plate and, while he’ll be carrying plenty of weight, he’s got some really good form in the book. He beat Allaho in his beginners chase and then finished second to Faugheen in the Grade 1 Flogas Novice Chase. That’s class form and he’s a second season novice and he’s won at the Galway festival in the past. He’s been aimed at the race for a while and we couldn’t be happier with him.

He’s another who’ll run in the Galway Plate and he’s another who’s got winning form around Galway. He won a maiden hurdle there, which is always a plus, and the last time we saw him was when he won at Naas just before Cheltenham. I think he’s a better horse going right-handed and he’s only got 10st12lbs as it stands. That’s a better weight than what Easy Game has and he’s around twice the price of Easy Game as well. I think he could be good value and at an each-way-price, I can see him running a good race.

He’s going to shoulder top weight in the Galway Hurdle but he was very impressive in winning the Grimes Hurdle at Tipperary. He beat Petit Mouchoir that day and his run before that was just as good when he was second to Saint Roi in the County Hurdle. He’s now 4lbs higher than he was that day but he’s in really good form. It’s a hard ask giving plenty of good horses weight but he’s come out of his Tipperary run really well and he has top weight for a reason.

She’s worth a mention too in the Galway Hurdle as she won the amateur maiden at last year’s Galway festival. She finished two heads behind Aramon in the County Hurdle and yet, she’s now 4lbs better off with him. She’s got one advantage over Aramon in that she’s won around Galway so we know she handles the course. To me, she’s a big runner in the Galway Hurdle on Thursday.

He won in Kilbeggan last month on his first start for Willie Mullins, when Brian Hayes was on board, and that was his first run for a long time too. He’s improved from that run as well and he’ll have options over hurdles and fences throughout the week. He looks to be improving and he’s one to follow wherever he lines up next week.

We’ve a couple of options for the maiden hurdle on Wednesday and N’golo might be the one for that race. This is a race that I had a good record in for Willie over the years and while we haven’t had any horses run in maiden hurdles for a while, this lad goes well at home. He ran once in France and we’ve had him a while. He’s done plenty of schooling, he’s done a lot of work and he’s good and fit ahead of next week. He stays really well too so Galway will suit him.

“From the horses mouth” with Mick Fitzgerald and Ruby Walsh