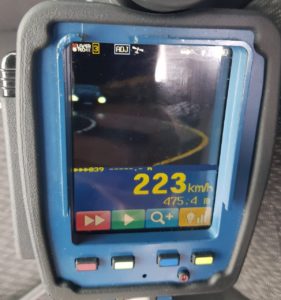 The speed detected at 223km per hour

A DRIVER caught doing nearly twice the motorway speed limit has been charged with dangerous driving.
The motorist, who was behind the wheel of an Audi A7, was caught by Naas Roads Policing Unit travelling at a staggering 223km/h on the M9.
Gardaí explained that the individual was charged with dangerous driving and is now facing a fine of up to €5,000 and disqualification from driving.
In a separate incident, the same unit spotted a car travelling at 80km/h in a 50km/h zone – gardaí revealed that a child seat in the rear was found to be unrestrained. Two fixed charge penalty notices (FCPNs) were issued.
Kildare gardaí have also appealed for help from the public regarding a stolen lawnmower. Moone Celtic FC have had their ride-on lawnmower stolen, the second time in just over a year this has happened.
“If anyone has any information about this mower, could you please contact the gardaí,” said Kildare Garda Division.