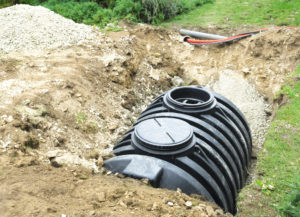 A WORRYING 41% of domestic wastewater treatment systems inspected in Co Kildare in 2019 failed, according to a report by the Environmental Protection Agency (EPA).

34 inspections were required last year in the county and 46 were carried out – a failure rate of 41% translates to 19 systems.

The report also noted that just 65% of the systems in Kildare that failed inspection between 2013 and 2019 (which was 63) have been fixed as of 30 April 2020. This is an area, the EPA has said, that requires increased engagement and enforcement by local authorities.

A response to the figures was sought from Kildare Co Council but, as of time of press, had not been received.

Domestic wastewater treatment systems are used by householders to treat sewage and there are nearly half a million in Ireland – mostly septic tanks. If not built and operated properly, they can contaminate household wells with harmful bacteria and viruses, while excessive releases of nitrogen and phosphorus can pollute rivers, lakes and coastal waters.

The EPA is responsible for the development of a National Inspection Plan for domestic systems – under the plan, local authorities are required to undertake at least 1,000 inspections each year, distributed based on risk across the country.

Nationally, the EPA report on 1,160 local authority inspections in 2019 revealed that 51% of systems failed and 26% were a risk to human health or the environment. A lack of maintenance and desludging was identified as a key issue.

The failure rate, it said, shows that there are many systems that pose a risk to people’s health and the environment, which is especially concerning if they are near household wells or if effluent is ponding (pooling) in the garden or being discharged into ditches or streams.

Householders across Kildare have been advised to ensure their systems are properly built and maintained and that their wells are tested.

The EPA noted that the grant scheme for septic tanks was recently expanded to cover specific areas where work is being focused to improve water quality under the national River Basin Management Plan, which means that more people will qualify for a grant.

Grants of up to €5,000 are available to fix domestic wastewater treatment systems.

“If you do not maintain your septic tank, it can contaminate your own or your neighbour’s well, putting your health at risk and that of your family and neighbours. It may also pollute your local stream or river,” said Dr Tom Ryan, Director of the EPA’s Office of Environmental Enforcement. “You can take simple steps to maintain your septic tank by cleaning it out regularly and by making sure it is not leaking, ponding or discharging to ditches. The Government’s expanded septic tank grant scheme broadens the availability of grants and increases the maximum grant available which is welcomed.”

The EPA also found that 27% of systems that failed inspections during 2013-2019 are still not fixed. “It is important that householders fix systems where problems are detected and be aware that they can pose a serious health risk,” said EPA Senior Inspector Noel Byrne. “While there has been an improvement in the number of systems fixed, there are still many systems where faults are not addressed over a number of years. This requires increased engagement and enforcement by local authorities to address remaining failures.”

Ireland Waste Water, which designs, manufactures and installs the likes of precast concrete wastewater treatment systems and septic tanks, has called on the Government to roll out an awareness campaign on grant support and a training programme for local authorities and homeowners tasked with the responsibility of maintaining sewage standards.

The company says there are two primary issues affecting the quality of water in various – particularly rural – locations around the country, namely the improper spreading of slurry and the sub-par maintenance of household septic tanks and wastewater treatment systems.

“There are nearly half a million domestic wastewater treatment systems (DWWTS) used by rural householders to treat sewage in Ireland and most (90%) are septic tanks. A very large percentage of these are not meeting the standards required and even after this has been pointed out, a large portion remain unfixed,” said Mary Mulcahy from Ireland Waste Water. “We are advocating for a hastening of the pace at which Government and local authorities are addressing these issues, and perhaps more sanctioning for those who don’t abide by the existing guidelines. The way local authorities deal with this issue varies from county to county also – there is not a uniform approach to penalties and sanctions when perhaps there should be.”