Familiar faces are the ones to watch in Senior Championship

THE Dermot Bourke Cup has resided in Newbridge since 2012 and there’s nothing that we have seen so far in this strangest of seasons to suggest that the 2020 Senior Champions will come from outside the town.

Both Sarsfields and Moorefield are operating under new managers this season but their early season suggests they haven’t taken a backward step. 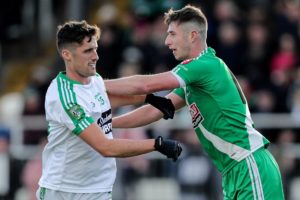 The county champions seem in particularly fine fettle. Billy O’Loughlin has big shoes to fill in replacing Davy Burke but the early signs are very good. Athy and Naas in the opening two rounds of the league gave Sarsfields the ideal chance to see where they stood ahead of Championship and they saw off both with a minimum of fuss.

The return of Ben McCormack and Matt Byrne means they are close to full strength heading into the Championship and they have youthful options to spring off the bench as well.

They have their most difficult group game in the opening round this weekend but Johnstownbridge, even under the management of Luke Dempsey, without the injured Daniel Flynn should hold no fears for them. The following two rounds against St Laurences and Eadestown should be easy wins and it would be a surprise to see the champions with anything less than maximum points after the group stages.

The opening round tie between St Laurences and Eadestown will be a key game in deciding who will finish bottom and drop into the relegation places and if Eadestown can reproduce their encouraging displays from last year’s Championship they could edge out a team now under the management of Kildare hero Tadhg Fennin.

Moorefield begin life without Ronan Sweeney the player but with Ronan Sweeney the manager against Carbury in Group B. Sweeney will see plenty of familiar faces on the sidelines after being landed in a group with Philly Wolfe’s Carbury and Frank Hanniffy’s Raheens. All three men enjoyed some wonderful successes together in their playing days with Moorefield but Wolfe and Hanniffy know Sweeney too well to be expecting any favours.

Carbury sprung a big surprise in last year’s Division 1 semi-final when they easily saw off Moorefield. It was a strange season for the Moors when they took a long time to get into their stride but they ended up just seconds away from a third Championship in a row. Even though he has been in the latter days of his career for the last couple of seasons, Sweeney will be a loss for Moorefield on the pitch and it will be intriguing to see how he takes to life in management.

He’ll know not to take Carbury lightly, who are always a tough proposition if Eoghan O’Flaherty can fire, but this looks like another group when the Newbridge side can finish with maximum points. Interestingly, if the two Newbridge teams win their groups the only time they can face each other under this new format of Championship is in the final

The Raheens and Maynooth game is another that could have big bearings on where either side finish the year. Raheens are in their third year in Senior football but they are still waiting on their first win outside of last year’s relegation final but they have shown well so far in life under Hanniffy and they will be no pushovers.

Outside of the Newbridge duo, Athy and Celbridge will again carry the biggest threat. There shouldn’t much in Group A to worry Athy. There were signs last year that Sean O’Dea was helping Clane to get their act together and the return of Brian McLoughlin after missing last year’s Championship through injury significantly adds to their attack and they will believe they can see off Castledermot and Monasterevan for the second place in the group.

The Clane and Monasterevan game this weekend should prove an exciting encounter and last year’s Intermediate champions will hoping that Wayne Fitzpatrick and Ryan Bannon can shake off knocks picked up in the league last weekend. Castldermot proved in last year’s groups that they are capable of providing a shock and the battle between that trio to join Ahty in the knockout stages is one to look out for.

In Group D, Celbridge and Naas should progress. Who knows what sort of Confey team will face Celbridge this weekend after they were unable to field a team for last weekend’s league tie away to Moorefield. With Fergal Conway back to full fitness Celbridge, now under the management of Meath man Dave Clare, will be far too strong for them for sure.

One of the big stories of last year’s Championship was Naas going from Division 1 league champions to the Championship relegation semi-finals in a matter of weeks and their manager Niall Cronin will be keen to ensure there are no similar slip ups this year. Long-term, they are the club with the best prospects of breaking the Newbridge stranglehold on the competition but they may need another few years to mature before they can really challenge.

A win against Round Towers on Saturday would be a good way to get started. Towers ended up in the relegation semi-finals last year and they will really be targetting their game against Confey to avoid the same this season.

All in all, it’s hard to go against Athy, Moorefield, Sarsfields and Celbridge topping their groups given the way that the draw has worked out. That would mean they are kept seperate in the quarter-finals and put them in a strong position to be the final four teams in the competition for the second season in a row. It’s up to the other teams in the competition to stand up and prevent that from happening. You have to go back to 2015 for the last time that one of those four teams lost a Championship game to a team from outside that fearsome foursome and St Laurences’ win over Athy that year is the only time it’s happened in almost 100 games. The Championship in this Covid times will have a very different feel to it but it’s hard to look too far past the familiar faces.