Flashback to the activities of Naas-Kilcullen Lions Club 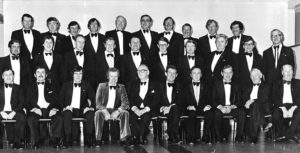 The Naas-Kilcullen Lions at their first Charter Anniversary Dinner, c1978-1979

ALTHOUGH the present Kilcullen Lions Club is long-established and has for many years raised substantial sums to help local charities and other organisations that need help, it’s probably not generally known today that there was a previous Lions group in the town.

The Naas-Kilcullen Lions were set up in the late 1970s, and during their time they worked successfully to support deserving groups in both towns equally.

Looking at some of the clippings of the club’s activities from that time shows that much has changed in 40 years, and also that much has not. Among the usual support for charities like the St Vincent de Paul and others, there was fundraising to bring older citizens from the respective towns for a summer holiday to the Butlins Holiday Camp in north Dublin, part of a national effort by the combined Lions Clubs of Ireland.

Support was also given beyond Ireland, and in one story of 20 December 1980 we read that funds had been sent for humanitarian needs in the Kampuchea crisis — that’s one forgotten in four decades, but such situations continue to happen today.

In that year, the main events organised by the Naas-Kilcullen Lions included a 10-mile Cycle Rally from Quinnsworth Car Park in Naas to Naas Rugby Club. The late Kilcullen businessman Gay Warren and Donal ‘Scones’ Fitzsimons of Naas helped organiser Tony Frost, and between them they managed to get some 250 participants of all ages. The Anniversary Charter Dinner of the Club was held in Frank Fallon’s well-known Red House between Newbridge and Naas.

A very poignant appeal in the file from Teresa Grattan of St Vincent’s Hospital in Athy notes that they had organised Knit-Ins to pay the difference between renting a colour TV and the black and white sets provided by the Health Board for each of the seven units housing the 310 older people there. She was hoping that the local Lions Clubs — Naas-Kilcullen, Kildare-Newbridge, and Athy — might help them buy sets instead of renting at a cost of £1,350 a year.

There are clippings which also report the handing over of Apple computers to the principals of the two schools — Sr Joan of Cross and Passion Convent and Sr Mary of the Naas Mercy Convent. Sr Joan said young people ‘need not be daunted’ by the increasing use of computers in their world, while Sr Mary said the gift would allow girls from her school to take up the optional Computer Studies programme on the curriculum.