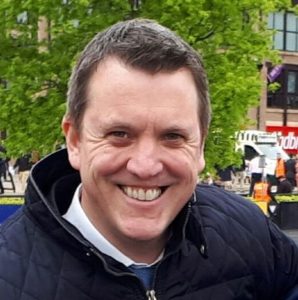 WHEN Specsavers Newbridge fitted Ray Murphy with state-of-the art hearing aids, his life was transformed, and he gained a new-found confidence and appreciation for his hearing.

Ray, aged 47, has been on a journey when it comes to his struggle with hearing loss, involving numerous surgeries and frequent ear infections. Never did he think that a pair of hearing aids would be such a simple solution to his years of difficulties.

Audiologist Carol O’Neill first met Ray in May as stores reopened for routine testing post lockdown restrictions. Ray was struggling to hear clearly in work and in social situations, particularly when people spoke to him from behind or from a distance.

“My hearing issues meant I struggled to hear in work in and it also had an impact in certain social situations where there was a lot of background noise. It’s a pity it took so long to reach the simplest solution – hearing aids. If only I had known sooner and could have done something about it. My hearing aids have given me back so much confidence and would encourage anyone who is struggling to speak to a Specsavers audiologist for advice.’

After a simple hearing test in store, Carol diagnosed Ray with mild conductive hearing loss and fitted him with a pair of aids to trial. After just one week, Ray was overwhelmed with the results.

“I have had so many hearing issues, spanning many years, which as you can imagine was a very stressful situation for me. After meeting with the audiology team at Specsavers Newbridge, my life changed for the better. They not only gave me my hearing back  but my confidence too. I am so thankful for my new hearing aids.’

Carol was delighted to see the transformation.  ‘It was heart-warming to see such a change in Ray after a week of trialling hearing aids and to see him speak so positively about the benefits,’ she says. ‘Often people can shy away from hearing aids or consider them to be a solution for an older audience which simply is not the case. Today’s hearing aids and technology are an option for anyone who need them. It’s great to see such a young guy like Ray promote the benefits of wearing aids and the positive impact it can have on quality of life. No one should have to suffer in silence.”