Plenty will fancy their chances in the Intermediate Championship

IF the Senior Championship feels a bit predictable for you then perhaps the Intermediate Championship is the one for you. As many as six or seven teams in this Championship will consider themselves genuine contenders and a couple more could find themselves in the mix with even a small bit of luck.

While the big guns were kept apart in the Senior Championship draw, there is a proper Group of Death in the Intermediate Championship.

Last year’s beaten finalists Leixlip, Clogherinkoe, a team who probably pushed eventual winners Monasterevan harder in a one point semi-final defeat than Leixlip managed in the final, and St Kevins have all been placed together in Group C. If those three weren’t enough, Rathangan are a team just below the best in the competition and are far from pushovers.

The only sure thing from this group is whoever is unfortunate enough to finish bottom are the team to avoid for the teams in the relegation play offs. Clogherinkoe, St Kevins and Rathangan were pitted together in last year’s group stages and Clogherinkoe ended it with maximum points. It’s a group that is sure to go to the final round of games and perhaps even the finals minutes of those games. Whoever does come through the group will be set for a real title challenge but it’s impossible to predict with any certainty who that might be. 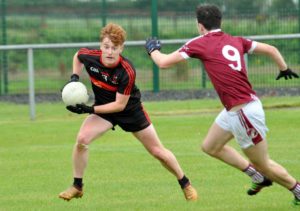 St Kevins are one of the sides who could win the Pittman Traffic Intermediate Championship but they will have to get out of their group first
Photo: Mick Anderson

Aside from that group, Group B looks the likeliest to produce the champions. Two Mile House were by a distance the best side in the Championship on their way to winning it in 2018 and they were unfortunate not to preserve their senior status last year. If they are anything close to their best they have to be the favourites to win a second Intermediate title in three years and a one point win over Leixlip in the league last weekend suggests they are in a good place.

They open their Championship against Allewnood and games against Nurney and Sallins will also provide good tests. The surprise semi-finalists of the last two years, Nurney in 2018 and Sallins in 2019, meet in the first round and the loser of that game could find themselves hurtling towards a different kind of semi-final.

When there are two stronger groups it stands to reason that there are two weaker groups and there will definitely be some better teams knocked out of the Championship than those who find themselves in the last eight.

Ballyteague and Kilcullen were the bottom teams in their group last year but won’t be without their chances in Group A this year, along with Straffan and Suncroft.

Kilcock look the standout team in Group D but Milltown, Ballymore and Ellistown won’t feel that second place is beyond them.