UNLIKE in previous years, there are no stand out sides in this year’s Tom Cross Junior Championship and it should lend itself to some exciting games.

Caragh and Rheban are the two Division 3 sides in the competition but they are not without their problems. Caragh were beaten by only a point by Allenwood in their first league game but were then hammered by St Kevins last weekend.

Rheban weren’t able to even a team last weekend and they seem to be badly struck by injuries at the moment.

Championship football brings the best of Robertstown and they will be there or thereabouts again this year after reaching last year’s final, while how Kill adapt to life in the Junior grade after years of barely hanging on to their intermediate status will determine how they go. 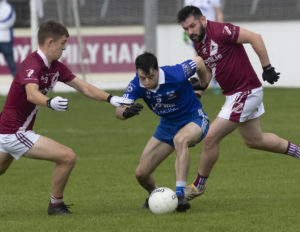 Robertstown and Caragh will be right in the mix in this year’s Junior Football Championship
Photo: Sean Brilly

The team to keep an eye on and potential darkhorses are Athgarvan. This is their first year back at this level of football in many years but by beating Castlemitchell and Grange in the opening rounds of the league they have shown that they aren’t just there to make up the numbers.

Castlemitchell and Grange probably don’t have realistic chances of winning out the competition but there is still a real rivalry between the clubs and their meeting on the opening weekend of Championship action is definitely one to watch out for.