Hughes and Browne sparkle as Celbridge ease to victory over Confey

A hat-trick of goals by David Hughes and six points from teenager Aaron Browne on his Senior Championship debut were the highlights as Celbridge recorded an easy 4-20 to 2-7 win over Confey today. 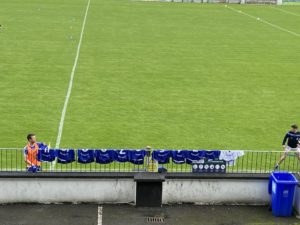 In manager Dave Clare’s first game in charge in the Kildare Championship, Hughes scored two goals in just over 30 seconds of play as Celbridge led by 2-12 to 0-2 at half time.

Confey had Colm Chan sent off in the first half but showed some spirit in the second half and were rewarded by two Niall Carney goals.

Hughes completed his hat-trick in injury time after Mick O’Grady scored Celbridge’s third goal but it was the brilliant performance of Browne that excited the most. He came to attention for Kildare’s minors last year and was superb in his first Senior Championship outing with all his tally coming from play.

In the Intermediate Championship, Jimmy Hyland scored eight points as Ballyteague beat Kilcullen by 0-16 to 0-6.

Full reports, photos and analysis from all this weekend’s SFC, IFC and JFC games in next Tuesday’s paper.