A look back at the history of Athy Museum Society 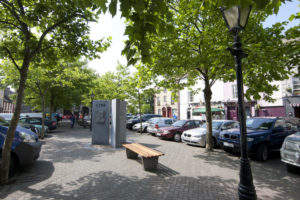 THIRTY-seven years have passed since Athy Museum Society was founded following a public meeting in the local courthouse. The building which accommodated that meeting and several subsequent meetings has had a chequered career since the day in 1857 when it was opened as Athy’s corn exchange. Looking back at the story of Athy’s Museum Society and the many changes in venues used as the museum room I note that it happily mirrors the awakening amongst the people of Athy of a deeper knowledge and understanding of the town’s past. The once hidden gems and forgotten persons of past Athy generations are now being recognised and with that recognition comes an understanding of many past achievements and an appreciation of the contribution made by so many to the development of our town.

Even the Museum Society itself has shown remarkable growth and has made quite extraordinary progress over the 37 years of its existence. The Sunday afternoon opening of a room in the otherwise vacant St. Mary’s Secondary School to display local historical artefacts was followed by a transfer to a side room in the Town Hall. This was facilitated by the then County Manager Gerry Ward who followed with interest the founding of the society and encouraged its development. Incidentally, the room allocated to the Museum Society was the former Town Hall Caretaker’s accommodation in the 18th century building, and when the society moved in was also home to the local fire brigade.

The first opportunity to upgrade the museum came with the departure of the local fire brigade to a new fire station at Woodstock. A comprehensive historical review of Athy’s history submitted to Bord Failte resulted in the designation of Athy as a heritage town. As a result, substantial funding was made available by Bord Failte to redevelop and fit out the entire ground floor of the Town Hall as a Heritage Centre. The expansion of the once simple museum room required the employment of staff and the Centre was generously grant aided by Kildare County Council in recognition of its importance in promoting learning, creativity and inspiration through engagement with the past.

Athy’s Museum Society, a voluntary organisation, then gave way to a company limited by guarantee, Athy Heritage Company Limited. Its directors were and still are community volunteers, but today the Heritage Centre about to embark on the next stage of it’s development has been renamed The Shackleton Museum. It will continue to be responsible for presenting the story of Athy and its people, but the Shackleton theme will form a large part of the proposed redevelopment of the Town Hall and the Museum.

The museum which has now re-opened following the Covid-19 closedown, is staffed by long time staff members Margaret Walsh and Sinead Cullen, assisted by local volunteers and a C.E. worker. The volunteers include Clem Roche, who provides a first-class genealogical research service for anyone with south Kildare connections, while Mark Guernon provides a walking tour of Athy for visitors. Bethany Webb McConville is another who volunteers in the museum and her Masters Degree in Library and Information Studies is of particular benefit to the museum where she has charge of the museum’s website.

Another volunteer was genial ex-army man Jack Davis who retired recently after many years greeting visitors to the museum. Jack was a wonderful ambassador for the museum and for his native town and did much during his several years with us to enhance the museum experience for overseas visitors. Kathleen Murphy is currently working in the museum on a C.E. scheme and with the manager Margaret Walsh and the Care of Collection Officer Sinead Cullen, forms a formidable team which keeps the working of the museum up to the standards required by an accredited museum.

I mentioned earlier the museum’s website and if you visit it’s site you can go on a virtual tour of the museum. The innovative 3D virtual tour is the work of Oliver Murray of www.contemporaryphotography.ie who gave his expert services free of charge to the museum. The 3D virtual tour gives an amazing view into the extensive range of museum exhibits and being available worldwide is a huge advancement on the facilities the Museum offered in the early years of its existence.

Many persons have facilitated the development of the museum over the years. Many others have encouraged the work of the museum, while there are many who worked sometimes in the public eye but more often without public recognition over many years to give Athy not only a first class museum, but also an annual international polar event which is recognised as one of the world’s foremost events of its kind.