JOHNNY Doyle continued his quite amazing record of appearing in every Allenwood Championship game since making his debut way back in 1996 but more importantly than that, he scored six points as his team caused a big shock in beating Two Mile House.

The House were convincing winners of the 2018 Intermediate Championship and were slightly unlucky to lose their senior status last year. Many expected them to bounce straight back up, and they still may, but today they came up against an Allenwood side who had impressive youngsters in Eoin Bagnall and Billy Maher but also the irrepressible 42-year-old Doyle in top form. 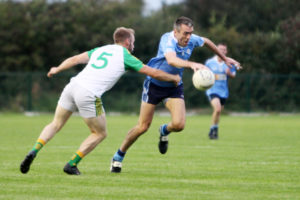 Full reports, photos and analysis of this weekend’s SFC, IFC and JFC games in Tuesday’s paper.