A hard working Round Towers side in the image of their manager Glenn Ryan stunned Naas in the opening round of this year’s Joe Mallon Motors SFC – but they needed an injury penalty save from goalkeeper James Robinson to do so. 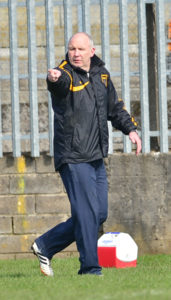 A goal late in the first half from Matthew Kelly into a 1-10 to 0-8 half time lead against a misfiring Naas side.

Naas closed the gap to within three points on a couple of occasions in the second half but Ryan’s men were determined not to let things slip.

There were still three points in it when Naas were generously awarded a penalty for a foul by Stephen Comerford on Colm Joyce that appeared to be outside the square, although the Towers defender was lucky to only pick up a yellow card and not a black for what looked to be a deliberate foul. Callaghan’s penalty was well struck but Robinson pushed it around the post.

There were still over 60 seconds to play and Callaghan appeared to have better claims for a penalty in the last action of the game but was only awarded a free kick which Towers were able to scramble clear and they held on to win 1-11 to 0-11.

In the Intermediate Championship, Allenwood caused a big upset by beating 2018 champions Two Mile House by 1-15 to 0-7.

There will be full reports, photos and analysis of this weekend’s SFC, IFC and JFC games in Tuesday’s paper.