Is there nothing Paul Mescal can’t do? 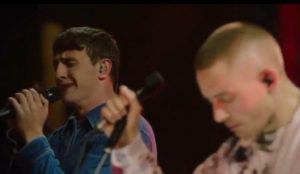 He is everywhere this week. Is there nothing this man can’t do? Maynooth’s own Paul Mescal. Hot on the heels of his Emmy nomination for his role as Connell in Normal People, he followed it with a fantastic performance on stage with fellow Irish man Dermot Kennedy as a special one-off live performance at the Natural History Museum in Lond on Thursday night.

Due to social restrictions, the concert was broadcast live without an audience but PaulMescal showed off his fine singing voice honed on the stages of amateur musical societies at home in Ireland.

Between each song, Mescal read out pieces of poetry.

The pair became friends after meeting on social media and Kennedy asked the Emmy-nominated actor if he wanted to get involved in the show.

Afterward, Dermot Kennedy took to Twitter to say: “Thank you for tonight guys, honestly. It really means the world to me. Thank you for supporting all of this.”

Check it out here.