Making the most of the humble Brussels Sprout 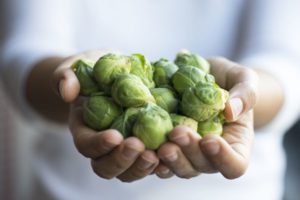 BRASSICAS – the cruciferous vegetables of the cabbage family – made a long and fruitful journey from the scraggly sea kale of its ancestor; today it provides us with one of our healthiest, easiest and most versatile crops, bred for its leaves (cabbage, kale, bok choi), its roots (kohlrabi), its flowers (broccoli, cauliflower) its seeds (mustard) and its buds (Brussels sprouts).

Such crops particularly suit Ireland, as they like lots of sun and water but not too much warmth – our summers, in other words. Moreover, many of them continue to produce throughout the year, as our kale does. Thus, in our garden cabbages comprise about a third of our crop, and we’ve been gathering them in and using or preserving them for the last month.

One of the best brassicas in the autumn and winter, of course, is Brussels sprouts, which are low in calories but very nutritious; they are high in fibre, surprisingly high in protein for a vegetable, and with 137 percent of your daily needs for Vitamin K – good for blood clotting and bones — and 81 percent of your Vitamin C, which helps your immunity. They are also high in antioxidants and omega-3 fatty acids.

In our garden the Brussels Sprouts have proven less vulnerable to pests than other cabbages — perhaps because they are raised above mud-level, perhaps because the pigeons can munch on their leaves and we get the buds. You can harvest them any time from autumn to spring, making them ideal for keeping your family in fresh vegetables through the time of year when finding vitamins can be difficult.

Many people boil the goodness out of Brussels sprouts, so one of the best ways to cook them is to boil them for just a few minutes and then do something else to them. Here are a couple of recipes I tried that do that:

Boil some water, cut the large Brussels sprouts in half, and put them in for three minutes – you want to flash-boil them, take the boiling water out and put in a bit of cold water to stop the cooking process. Then you take a strip of rashers, cut it into pieces about a centimetre across, and fry them in a pan. While that is frying, chop the leeks into one-centimetre pieces (make sure to wash them well first!) and slice some mushrooms half a centimetre across. Take 20g of beetroot and cut into cubes half a centimetre across. Finally, mince some garlic or chop it very finely.

When the rasher pieces are cooked just enough to be edible but not yet firm, put in the mushrooms, leeks and beetroot. Sautee these together for a few minutes, then add the minced garlic and sautee for another minute or so.

Dissolve a vegetable stock cube in about 10 ml – about a tablespoon – of boiling water, and mix well. Add that to the mix with about 20 ml of lemon juice, so the mixture begins to sautee for a minute. Add a dash of five-spice powder; it’s available at most supermarkets, a mix of star anise, cloves, cinnamon, pepper and fennel seeds. Finally, add the Brussels sprouts and mix it all together. The result should be savoury, garlicky, tangy and just a bit spicy.

Flash-boil the sprouts as before, putting halved sprouts in for two minutes or so. (I’ve also tried this recipe without flash-boiling, and it can work, but some of the larger sprouts can be a bit tough.) Then heat some olive oil in a pan and add the sprouts and a diced onion, and cook until the onions are golden brown. Add shredded garlic and cook for another minute or so, and add shredded Romano or Parmesan cheese, salt, black pepper and a dash of lemon juice.