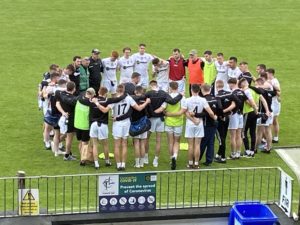 Two Padraig Nash frees were all Monasterevan had to show for their efforts in a 3-17 to 0-2 defeat.

Clane only won the 2018 relegation final by a point and were in three of the previous four relegation semi-finals before that but there were encouraging signs today that many of their talented youngsters are starting to mature. They will be one of the most interesting sides to watch in the remainder of this Championship.

In the Junior Championship, Castlemitchell beat Grange by 0-10 to 0-5 while, Moorefield man David Whyte had a good start to his managerial career when his Rathcoffey side beat Athgarvan by 0-16 to 1-5.

Full reports, photos and analysis of all this weekend’s SFC, IFC and JFC games will appear in this Tuesday’s paper.