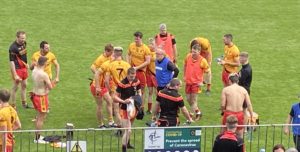 Led by Padraig Fogarty, Larries moved into a 0-5 to 0-1 lead by the 11th minute but Eadestown were level at 0-6 each by the 23rd minute. That was the only time in the game that Laurences weren’t ahead and even though they went down to 14 men for that last seven minutes of the half they outscored Eadestown by three to lead 0-10 to 0-7 at the break.

Eadestown had to play most of the second half with 14 players after Conor McCarthy was sent off in the 31st minute but they didn’t take a backward step and by the end were left to rue not making the most of some promising attacking situations.

Despite their best efforts, Laurences were able to hold them at bay and gain a crucial win with games against Johnstownbridge and Sarsfields to come.

In the Junior Football Championship, Robertstown beat Kill 2-12 to 0-9.

Full reports, photos analysis of all this weekend’s SFC, IFC and JFC games in next Tuesday’s paper.