THE Club Championship returned to Kildare last weekend, and while the Covid restrictions meant it wasn’t quite in all it’s old glory but there was enough there to remind us why we love it. 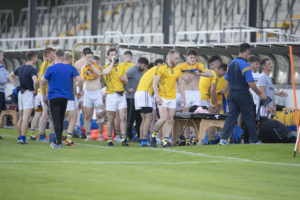 Raheens prepare on the sidelines ahead of their game against Maynooth
Photo: Sean Brilly

Carbury might not have appreciated it but the quality of Éanna O’Connor’s kicking was glorious as Moorefield marked the turning of Ronan Sweeney from player to manager with a straightforward win.

There was a proper GAA story when Billy O’Loughlin’s Sarsfields set out their stall to retain their title by beating a Johnstownbridge team managed by his uncle Luke Dempsey.

Then there was the redemption of Clane. One of Kildare’s most successful clubs but one who have endured some tough times in the recent past. A club that seemed to be hit by emigration more than most and while they teetered on the brink of relegation for much of the noughties it was often said that they could field a stronger team from players scattered around America, Canada and Australia than they could in the Kildare Championship. But while their senior team struggled and the likes of Eoin Naughton did what they could to keep them in the top level of football, the underage section was working away churning out quality player after quality player. There was the first signs of that work bearing fruit at senior level on Sunday in their big win over Monasterevan. Some of those young players were on the wrong end of the kind of result they dished out at the weekend but they appear now stronger for it. They may or may not build on that in their next game against Athy but if Clane can keep their players together they are going to be a fun team to watch in the next few years.

Among all the ups and downs, it felt like something more than winning a football match for Round Towers on Saturday against Naas. The tragedy that befell the Ryan family and the Round Towers club during lockdown with the sad passing of Liam was a reminder that the world can be a cruel place even without Covid-19. Liam’s brother Glenn was a very happy man after James Robinson’s injury time penalty save prevented a footballing tragedy of Round Towers letting slip a game they thoroughly deserved to win. No football match could ever replace the loss of a loved one but the GAA has a wonderful way of bringing a tiny piece of joy to people in their darkest hour. Ryan has always had a wonderful ability to motivate people and every Towers player seemed to carry the same determination with them that he showed during his illustrious playing career. This was a team playing in the image of their manager, for their manager, and while it meant more Championship heartache for Naas the hunger and desire Towers showed was a beautiful thing to see. 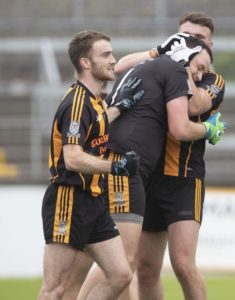 James Robinson is mobbed after his injury time penalty secured a well deserved win for Round Towers
Photo: Sean Brilly

Celbridge, Athy, St Laurences and Raheens all enjoyed excellent wins too but where there are highs there have to be lows and the six teams beaten by double figures will be licking their wounds this week and hoping to rebound stronger the next day. 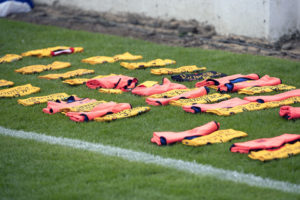 St Laurences jerseys are laid out on the sideline before their game against Eadestown
Photo: Sean Brilly

Away from senior football, the incredible tale of Johnny Doyle began another chapter as he started his 25th Championship season with his club. Never mind making his Allenwood debut by the time that Eoin Bagnall was born, he was already established as one of the best forwards in the country with Kildare between by the time Bagnall drew his first breath. Between them they scored 1-9 as Allenwood defeated Two Mile House, a result that puts Allenwood firmly among the many contenders for an Intermediate title this year.

Amidst all this, a reminder of just how fragile things are at the moment with the postponement of the Rathangan versus Clogherinkoe game due to Covid concerns. There were reminders everywhere you turned at games this weekend of our current environment – restricted numbers, substitutes in stands, jerseys laid out on the ground as teams managed without dressing rooms, the Sarsfields ladies sneaking onto the wall at the Kilcullen end to get a view of their men’s team against Johnstownbridge. 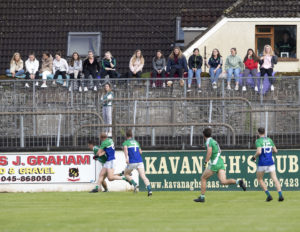 The Sarsfields ladies team get a good spot to see the Sarsfields v Johnstownbridge game while Jim Dempsey watches on from his kitchen
Photo: Sean Brilly

It was wonderful to be back but let’s just hope we remain in a position for the games to continue.

Full reports, photos and analysis of all the weekend’s game are in today’s paper, available in shops now.