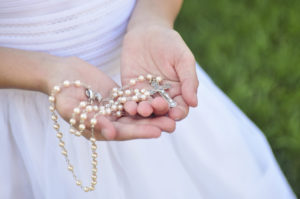 Saturday in the local church – came when the government ordered the

next weekend while Confirmation services have also been postponed in the

parish for the next fortnight.

Many parents, while they appreciate the importance of the restrictions to tackle

the localised outbreak of the Coronavirus, are annoyed that the First

Communion services were cancelled. They think that an alternative solution

should have been found, such as allowing the children to attend the service in

with orders from local families, both for the weekend’s cancelled services and

the ones that were scheduled for next weekend. She’s seen at first hand how

“I don’t think it was necessary for the Communion to be cancelled. It was only

a small group of people, with 14 children involved,” Holly told ***The

Nationalist***. “I do understand why the restrictions were introduced but why

wasn’t there a plan B? Considering that we’ve been going through this

pandemic for months and there was always a chance that this could happen,

why weren’t alternative plans made? The way it was handled was wrong. This

is the second time that the Communion has been cancelled. ”

cancelling the religious services because of the government guidelines. He said

under lockdown conditions because even outdoor gatherings were limited to 15

“disappointed” about the move.

cancellation was “a huge disappointment” for the children.“You’d be upset for them, they’ve been looking forward to it so much, but it

was the right decision. It’s highly unfortunate and it’s very sad but we’re in the

midst of a global crisis here,” she said.