THE made their Championship debuts in Millennium Year 2000; Ronan Sweeney, Johnny Doyle and Tadhg Fennin, the Millennium Babes, the Three Amigos.

They joined young guns, Dermot Earley and Padraig Brennan as well as many of the other heroes of ’98, Glenn Ryan, Willie McCreery, Martin Lynch, Anthony Rainbow, Christy Byrne, John Finn, Brian Lacey, Ken Doyle etc, in providing one of the greatest comebacks and victories in Kildare history on 12 August 2000, 20 years ago today. PAT COSTELLO looks back on that famous Kildare win. 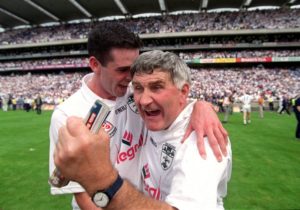 Kildare managerMick O’Dwyer celebrates at the end of the game with one of Kildare goalscorers, Dermot Early
Photo: ©INPHO/Billy Stickland

Picture the scene! It’s half time in the Leinster Football Final Replay. Kildare are six points down to Dublin. Dublin supporters on the Hill are signing. Dublin supporters in the stands were laughing and joking and setting their minds on an All-Ireland Semi Final appearance. In their eyes it wasn’t a matter of would the Dubs win but the margin of victory was being discussed.

Kildare supporters on the other hand were almost in despair. The team, backboned by players who had captured the Delaney Cup two years previously, hadn’t performed to their potential in that first half. This same team that had beaten Offaly in a replay earlier in the Championship. This same team that had been unlucky not to win the drawn Leinster Final with Dublin forcing a replay at the death. This team now boosted by the “Millennium Babes”, Ronan Sweeney, Johnny Doyle and Tadhg Fennin who were supporters in the stands in ‘98.

Back in the RTE Sunday Game studio Pat Spillane and Colm O’Rourke were providing the half-time analysis. Both were critical of the Kildare performance with O’Rourke more balanced in his summation. Spillane however didn’t hold back on the barbs towards the Lilywhites. He described Kildare as “woeful and inept” and referring to two Kildare substitutes, heroes of ’98, he thundered “if Karl O’Dwyer was in Kerry he wouldn’t be making the Kerry Senior Championship side and if Bryan Murphy was in Cork, he wouldn’t be making the Cork Junior footballing side”.

As it turned out both O’Dwyer and Murphy played a big part in the Kildare recovery as did the “Millennium Babes” of Sweeney, Doyle and Fennin each appearing in their first championship season.

What was the Kildare dressing room like at half time? Was there panic among the players? Was there the hairdryer treatment or the breaking of cups off wall by Mick O’Dwyer? Did they a TV in the dressing where Spillane’s rant was relayed to the players to inspire them for the second half?

Not so says Johnny Doyle and Tadhg Fennin agrees. Johnny Doyle goes on to explain, “We had a dressing room full of big characters who knew how what it meant to play for Kildare, Glenn Ryan, Willie McCreery, Ken Doyle, Anthony Rainbow and many others. I remember it as a calm dressing room. Micko was never into the hairdryer treatment, he always made you feel that you were the most important person on the team”

“Glenn spoke, Willie spoke and one or two others and maybe Rainbow spoke as well. But I always remember Glenn was last to speak and he asked that we leave it all out there. He asked us to forget about the result, to leave every ounce we had out there, run for every ball, attach every ball as if our lives depended on it. Jesus the hairs were standing on the back of bour necks as we went back out,” Doyle remembers. 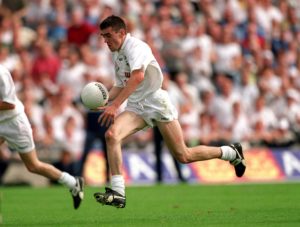 John Doyle on the run for Kildare 20 years ago today
Photo: ©INPHO/Patrick Bolger

“I remember to this day”, Johnny added, “Bryan Murphy, who is a big man, was just ahead of me and he swung the dressing room door open and roared “no surrender” as we ran back out. The rest as they say is history”.

History indeed! The records will show that within 90 seconds of the restart Kildare had drawn level and Dublin were shell-shocked. Padraig Brennan fed the in-rushing Dermot Earley for goal number one and from the kick out Johnny Doyle was involved in the move which was finished to the net by Tadhg Fennin.

Castlemitchell man, Tadhg Fennin remembers the day and the scores thus. “You have all sorts of intentions of going out and getting the first score in the second half to put down a marker but Padraig Brennan did well to get the ball to Dermot to score and that was just the kick we needed, really. The first goal was the key. We were then on top at midfield and Willie McCreery won the ball from the kick-out and Johnny ran the ball through the middle as we had opened them up. Then Bryan Murphy arrived on to the ball and probably just as he was about to probably pull the trigger, he got a shoulder which turned him towards me. This made it easier to see me and get the hand pass off to me. Paddy Christie was on the line and my shot hit off his knee and into the net. I scored with my right foot, which would have been unusual for me at that time but thank God it went in”. “At that stage it was only level but we felt that there was no way Dublin were going to win it, you could see them totally deflated,” Fennin added. 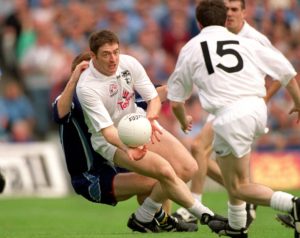 Kildare went on to win the game on a scoreline of 2-11 to 0-12 and became Leinster Champions for the second times in two years. It was also the first time to beat the Dubs in a Leinster Final since 1928. This was a Dublin team that contained five-in-a-row Manager, Jim Gavin, current Manager, Dessie Farrell, and Back Room Team Member, Jason Sherlock.

Reflecting on the victory on the day neither Doyle nor Fennin can believe that 20 years have now passed without another Delaney Cup win for the Lilywhites. Each had the feeling that with this victory as 22-year olds then more wins would be on the cards. There were near misses but alas no more silverware.

“It was such a great day for the players and the county, Doyle remembers. “It was the start of my career and here we are 20 years later and it has never been emulated. Some close calls, granted, but no cigar as they say”, he ruefully reflected. 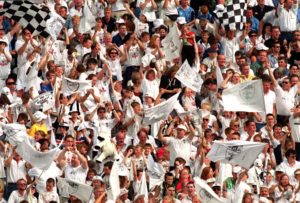 “Every year we have hopes”, Fennin said. “We go up there (to Croke Park) as fans and as fathers and we hope for the win. When I was young and playing I would meet my mother and father after a game and I would love for another player to have the feeling I had on that day 20 years ago; to be able to go back to your club and have people telling you how proud they were of you. But it was one day, it was one medal but it was a special day”, Fennin mused.

Ronan Sweeney, Johnny Doyle and Tadgh Fennin went on to provide great service to the GAA, to their county, to their respective clubs and they are still giving it back to the GAA either as players or club managers.

That victory in 2000 gave Lilywhite supporters to dream of All Ireland glory once again but once again the Tribesmen from the west put paid to those dreams just as they had done in ’98. 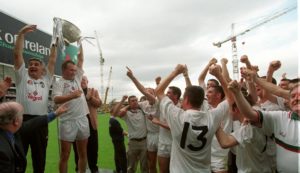 Twenty years on and Kildare supporters are still dreaming of All Ireland glory. Could 2020 and all its abnormalities be the year when those dreams might be fulfilled. An early Christmas present for the success starved Lilywhites, perhaps!