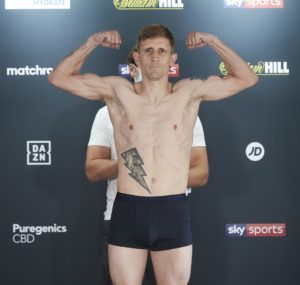 ATHY native and BUI Irish Featherweight Champion, Eric Donovan, will be live on Sky Sports on this Friday night as he faces Zelfa Barrett from Manchester, in the back garden of boxing promoter Eddie Hearn in an IBF Intercontinental title fight.

Defending an unbeaten professional career of 12 fights, 7 by knock-out, the Lilywhite Lightening, who turned 35 last month, will step up a weight in taking on the Commonwealth super-featherweight champion, eight years his junior, on the Felix Cash/Jason Welborn card.

The fight will expose Donovan to huge UK and US television audiences something he deserves for his entire patient build up since joining the professional ranks.

Donovan, a European bronze medalist in 2010, recently teamed up with Belfast-based, Mark Dunlop, who had strong links with Hearn, which in turn led inclusion on Friday’s card.

Taking to twitter last week, the popular Donovan said, “I cannot thank Mark Dunlop enough for securing this opportunity for me. I am also extremely grateful to Matchroom Boxing for the chance to be involved in a massive fight on a fantastic platform. The time is near, much love and best wishes to all my team and supporters.” Earlier this week he added, “I never felt more proud to represent Ireland, this is a special time.”

Victory for the Kildare man on Friday night would surely open up many countless doors and even bigger opportunities on other UK fight cards. The eyes of a nation will certainly be upon him.