How to preserve eggs 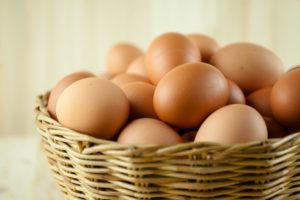 VEGETABLES from the garden give you vitamins and carbohydrates, but vegetables are fairly low in protein, and people who adopt a “vegan” diet have trouble getting enough to stay healthy. If you want to be self-sufficient, one of the easiest ways is through keeping chickens and gathering the eggs every morning. You could also raise ducks, geese or other birds – I know people in Missouri who raised ostriches and used their giant eggs – but ducks require water, larger birds require more space, and they all have their own problems. For most of us, chickens are the best option.

Yet hens lay less in winter, and eggs don’t keep forever, even in a refrigerator, so how do you make sure you will have enough eggs to take you through the winter? People around the world came up with a variety of techniques to preserve eggs over the millennia, which were used for thousands of years until eggs and shipping became cheaper in the 20th century. They’ve been almost forgotten today, but they still work, and knowing a few of them can help people preserve food without always going to the store, and would be good skills to have in case of an emergency.

The first is keeping eggs in limewater; “lime” does not refer to the green fruit, the juice or the tree, but to the white powder made from burning limstone in a kiln. Burning limestone resulted in “unslaked” lime or quicklime, which Irish farmers spread over soil to make boggy, acidic land more fertile. Mixed with water it made lime powder, used as an antiseptic, to make whitewash, to repel slugs from gardens, or to disinfect water. And when mixed with water, it preserves eggs.

To keep eggs this way, just mix lime powder – you can get it from any hardware store – into a jar of water until no more will mix in. Then gently lower fresh eggs into it, and they’ll save for at least a few months. Mine acquired a slightly different smell and flavour, but never went rancid even after six months.

Eggs can also be preserved in glasswater – which can refer to synthetic silicates or to the more old-school isinglass, a substance extracted from the dried swim bladders of fish. Some people recommend only the former, but the latter worked fine for me; you can order isinglass online from home-brew stores and typically arrive in clear panes that dissolve in water.

To keep eggs this way, you’ll need isinglass (or its synthetic equivalent), eggs, and a deep, sealable jar, like a Mason jar. First, dissolve the isinglass in water according to the instructions they come in, typically in a pot of hot water over the stove. Let the isinglass cool, and while that’s happening, wash the eggs gently and stack them in the jar. Pour the isinglass over the eggs until they are completely submerged, and leave until it sets to a gelatin-like consistency. Finally, seal the jar.

This year I preserved eggs in a mix of half ash and half salt, mixing them with water to make a paste, and then plastering them over the eggs until no surface was visible. I let the coating dry and let the eggs sit in a bowl in my room, occasionally prying one out to see if they were still edible. After three months, they were fine, but after that they started to rot.

You can also pickle eggs in vinegar and spices. You’ll need 700 ml of vinegar (I used cider), a teaspoon of salt, a few cloves of garlic, and a handful of peppercorns and red chili seeds.

This technique, unlike the others, requires you to hard-boil the eggs before preserving them – not soft-boiled like a breakfast egg, but well and boiled through. While you’re peeling the eggs, put the vinegar and other ingredients into a pot and bring to a boil, and then let cool to room temperature. Put the peeled eggs in a jar and pour the vinegar mix in, with all its ingredients. Some people recommend sealing the jar and putting it in a bath of boiling water for a few minutes, just to make sure it’s sterilised.

Leave the eggs in the vinegar for at least a few weeks before eating; if unopened, they should keep for about six months. Enjoy!

Over 2,400 new COVID cases ahead of bank holiday weekend