IT’S seconds out, round two for Kildare professional boxing this week as Naas man, the Sarto Southpaw, Gary Cully, fights Welsh Area Champion, Craig Woodruff tonight (Wednesday 26 August) in front of the TV cameras in Wakefield. Woodruff is a replacement for fellow Welshman, Kieran Gething who had to withdraw last month. 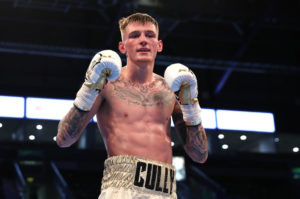 Standing at 6ft Woodruff is just 2 inches shorter than Cully but is taller than most of Cully’s previous opponents and is therefore considered to be a dangerous and awkward opponent.

Cully, affectionally known as “The Diva”, was sensational in capturing the Irish lightweight title by defeating Joe Fitzpatrick in the Ulster Hall in Belfast last February. Since then he has been training under the watchful eye of his Coaching Team that includes Pete Taylor and Niall Barrett.

He has recently completed an eight-week camp which he says he entered very fresh.

“I’ve improved since the February fight and my training has gone well at Unit 3 Fitness Centre in Naas”, the Naas man explains. “I’m looking forward to getting next Wednesday out of the way and then travelling up the European ranks.

This will be my 11th professional fight and for a good portion of them I’ve had to face a replacement opponent so I’m well prepared for such scenario. I just concentrate on what I do well and if I do it well then, I don’t have to worry about what anybody else can do”.

Cully’s record speaks for itself with 10 wins from 10 and five within the distance and he will put this on the line on Wednesday night. “Woodruff has 10 wins also so he has nothing to lose so a win here would give him a good boost to get up the British rankings and maybe fight for an eliminator for a British title. I’m very confident of defending my own record and winning the fight on the night and in putting in a career best performance.

He is likely to be an awkward customer and it may take two or three rounds to get the timing right and get into the groove”, “The Diva” explained.

Preparation has gone really well according to the Sarto boxer with top quality sparring rounds with top quality fighters and coach, Niall Barrett, agrees. “Gary has trained all through lockdown and he is in the best shape of his life. He is bigger, fitter, faster, stronger. His mentality and his work ethic are probably his two biggest strengths He constantly wants to improve, competing with himself but he will have to be disciplined and patient over the first two or three rounds on Wednesday.”

Cully is fulsome in his praise of Pete Taylor and Barrett. “I think Pete’s style as a coach compliments my style as a fighter and we work really well together. Niall Barrett’s expertise in the strength and fitness is also second to none and I’m really lucky to work with both of them

Just like it was for Eric Donovan two weeks ago Cully recognises that fights like Wednesday night give him massive exposure opportunities. “I’d be used to fighting in a place like the Ulster Hall before maybe a 1000 people but on Wednesday the fight will be broadcast to a much bigger TV audience. It’s good for me to get to England and hopefully after this I will have a fight in England when shows are back and fans are allowed in.

I want to make a statement with the win and then get a chance to fight for a European title coming towards the end of this year,” the Kildare man confidently stressed.

Cully’s fight fight will be streamed live on YouTube and coverage starts on this link at 7pm https://youtu.be/XG94msiWiKI/.