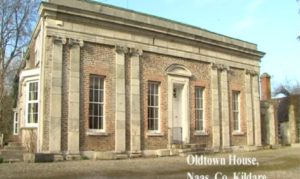 PLANS to convert disused stables at Oldtown House in Naas into five residential units were turned down this week after the planners decided the parking provisions were “insufficient”.

Springwood Builders from Straffan submitted plans in December to demolish a toolshed and convert the stables in the historic demesne into a small, two-bed house, as well as four one-, and two-bed apartments over two storeys.

However, despite O’Flynn Architects from Newbridge submitting amended plans last months as requested by the planners, they still only provided just two parking spaces for the four apartments.

“The insufficient and deficient parking arrangements for the proposed development therefore represents the hazard of unauthorized parking on the access roads and footpaths within the site due to its confined nature,” deemed the planner.

The house was last in the news in March when Kildare County Council revealed it had erected a first public assess gate to the demesne lands off Mill Lane, near Tandy’s Bridge.

This was a first positive step achieved by the council in the last four years of negotiations over the lands.

On his death in 2010, Major John deBurgh bequeathed the 22 acres of the Oldtown House gardens to the town to be used as a public park, but only after the death of his wife Clare, who subsequently passed away in 2016.

However, by an unfortunate turn of events, the parcel of lands bequeathed happened to be surrounded by privately held lands, and so the stand-off became the default position for the local authority for the last four years until the literal breakthrough in March.

“These gardens are to the town what Russborough is to Blessington, or Palmerstown is to Celbridge,” said cllr Bill Clear at the time.

“The land was bequeathed to Naas Town Council by the Major, and it was his wish that it be used as a park,” explained the councillor.

“The county council has installed the gate for maintenance of the garden. I think it’s a great start, and I’d hope to have it accessible in the near future,” he said.

As it stands, it is believed that Kildare Co Council has full possession of 16 acres of the gardens, with the remaining six – including the famous Well of St Patrick – still in some degree of negotiation.

The Oldtown Gardens have been included in Naas Town Plans since 1998, when the Major indicated his intentions to the then County Manager, prior to his sale of Oldtown House in 1999.

The leafy estate has been in the family since Thomas Burgh, Surveyor General of Ireland in the early 18th century, and a forefather of singer Chris de Burgh.

In 1696 he acquired almost 3,000 acres outside Naas called Oldtown, near a holy well where St Patrick reputedly baptised Oillill and Illann, the sons of  King Dunlang of Leinster.

In 1709, he designed and oversaw the construction of a new house here, one of Ireland’s first Palladian winged houses.

It was to remain the pride of his descendants until the centre block was destroyed by fire in the 1950s and the family moved to one of the wings until the sale 21 years ago.