Home-grown managers thin on the Kildare ground says The Supporter

“Truly I tell you, no prophet is accepted in his hometown.”- Luke 4:24

I am sure Niall Carew has the ambition to manage Kildare someday. Davy Burke certainly does and he makes no bones about that. Anthony Rainbow probably does too. Glenn Ryan certainly did, at least at one time. 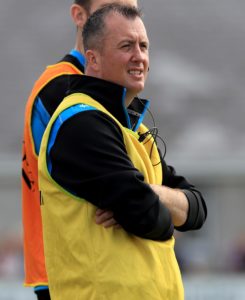 Niall Carew INPHO/Donall FarmerIn the last 45 years, Kildare have had eleven senior football managers. Only four of them were home-grown, their stints lasting sixteen years in total. As the saying goes: “An expert is a man with a briefcase 50 miles from home.”

Eamonn O’Donoghue had two stints at it. A classy player with Sallins and Johnstownbridge, he learned much of his trade under Eugene McGee with UCD and in his first stint as senior manager with the Lilies he brought them to two Leinster Finals. They lost both by a country mile to Dublin in ’75 and ’78.

O’Donoghue was out the door in 1981 with Longford’s Bobby Burns becoming our first “outside” manager since the days of selection committees, but Eamonn had another go for a year in ‘84/’85.

It was eighteen years before another local was handed the reins. In the meantime, Cork’s John Courtney, Offaly’s Pat Fitzgerald, Kerry’s Mick O’Dwyer (twice) and Roscommon’s Dermot Earley were the prophets brought in to steer the team. Granted, two were based in Newbridge. Only O’Dwyer can claim to have succeeded, the others failing to reach even a provincial final.

When Kilcock’s Pádraig Nolan took the reins after O’Dwyer’s second departure in 2002, a period of transition was expected but he did well to steady the ship initially and bring us to a Leinster Final in his first season. The loss to Laois signalled a period in the doldrums however and his successor, Sarsfields’ John Crofton, had a disappointing spell as well.

After O’Dwyer, the only man to bring Kildare close to success was Kieran McGeeney, with his five All Ireland quarter finals and one semi-final, a Division 2 title and running Dublin so close in a high scoring Leinster Final in 2009. At least he had a Kildare man, the aforementioned Carew at his side for much of that time.

Whatever about appointing men from strong football counties, Kildare looked to Waterford man Jason Ryan next, on the back of his admittedly impressive stint with Wexford, although his appointment probably owed much to being in the right place at the right time, having become McGeeney’s coach when Carew opted to go it alone with Waterford.

When Ryan got Kildare relegated two years in a row and shipped almighty hammerings to Dublin and Kerry in the championship, the county board looked to their own again, although one who was living in Cork and had learned his trade in the backroom teams of Tipperary hurlers and Mayo and Kerry footballers.

And now we are back to a Kerry All-Ireland winning manager in charge but he has had little chance to get any momentum going with the mess that 2020 has become.

When you look through those eleven managers, the only two we can say were successful are two of the outsiders, O’Dwyer and McGeeney, and both were very special men in their own playing careers. When you compare the other five outsiders with the four Kildare born men, though, there’s little evidence that going for the “expert 50 miles from home” is a predictably successful strategy.

All the while, a stream of Kildaremen have tried their luck with other teams. Luke Dempsey was a trailblazer. He had nine years in all managing Westmeath at various levels including three at senior level and led them to minor and under-21 All Ireland titles. He had four years with Longford and two stints with Carlow as well as managing Moorefield to two county titles. And yet, the call never came from Kildare.

Managing Carlow, seems to be an enticing route for many Kildaremen. Mickser Condon is the first I can recall, the Clane man having two years there in the early 2000’s that ended in acrimony when the team went drinking before a league game in Donegal.

Anthony Rainbow
INPHO/Morgan TreacyRainbow had a go as well with the Scallion Eaters and has since gone on to do impressive work with Ballyboden. The Kildare job may be on his horizon at some stage.

Carew’s progress with Carlow will be monitored with interest in Kildare. He had degrees of success with Waterford (almost shocking Galway in a qualifier) and Sligo (beating the Tribesmen in a provincial semi-final). We could certainly use a manager who knew how to beat Galway.

The Coill Dubh man’s forte is coaching forwards. That was his role with McGeeney and his Waterford and Sligo teams were not renowned as watertight ships. His appointment in Carlow of all places is intriguing given the rigid “system” Turlough O’Brien and Steven Poacher had in place down there. Successfully meld that defensive strength with a more progressive attack and Carew could come into the reckoning in Kildare down the line.

He will compete with Burke in Leinster and Division Four. The All Ireland under-20 winning manager is nothing if not confident in his own ability and turned down the chance to be a number two in Kildare to go his own way with Sarsfields firstly and then Wicklow.

We watch that space with interest too.

Glenn Ryan is the one who many feel should have got the local gig and he showed his leadership once more with Towers’ gritty win over a Naas team coached by Carew a month ago. His spell with Kildare under-21’s and Longford seniors suggested he’d manage the Lilywhite seniors.

Others to venture outside the county were Tom Cribbin (Offaly, Laois, and Westmeath), Roli Sweeney (coaching with Carew in Sligo), Karl O’Dwyer (Killeshin, Laois) and Enda Murphy (Castleknock). Jarlath Gilroy managed both Blessington and Hollywood in Wicklow.

If you add in the likes of Ross Glavin and Ronan Quinn, who have stayed within county borders so far, there’s no lack of management capability within the county once the (hopefully long and successful) Jack O’Connor era is over.

Maybe we can profit from a local prophet next time.

The Supporter Column appears each week in The Kildare Nationalist