There was disappointing news overnight, tinged with a bit of good news, when it was announced that Katelynn Phelan’s fight was postponed. The St Brigid’s BC light welterweight was due to fly out tomorrow to take on the undefeated German champion, Jessica Schadko, in her home town of Donauwoerth,on Saturday night. News then came through that the German had been hospitalised and that the fight was postponed. 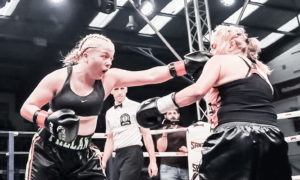 While there was disappointment for Ireland’s youngest professional boxer the good news was that the fight was postponed rather than cancelled. There was further good news for the Kildare woman when her Coach, Niall Barrett, told us that the possibility of a fight in Spain in October was being explored.

HER family may not have known that Katelynn Phelan had posted off her professional boxing forms a couple of years ago but after next Saturday night most of Europe will have heard of the 19-year-old Kildare boxer. The St Brigid’s Boxing Club light welterweight travels to Donauwoerth in Bavaria, Germany to take on local favourite, Jessica Schadko, the undefeated German champion, with belts at WBF and WIBA levels will be at stake over eight, two-minute rounds.

Phelan, Ireland’s youngest professional boxer, had the last of her three successful fights on 1 February when she defeated Bulgarian, Borislava Goranova in Belfast. Schadko had similar success when she took on the Bulgarian two weeks later in the Bavarian capital.

This will be a big step up for the young Kildare boxer, a former World Youth and Junior medallist, as she has never boxed beyond four rounds and she will face German-Ukrainian, Schadko, a crowd favourite in her home town, who has fought up to 10 rounds in the past.

Katelynn has been involved in boxing since she was seven under the expert guidance of her father, Paddy, at St Brigid’s BC and lately by Niall Barrett at Unit 3 Health and Fitness in Naas. Barrett, of course, was part of the coaching team for Gary Cully’s successful fight in Wakefield last Wednesday. Although there was some family resistance when she first took up boxing and she mischievously posted her pro forms before telling them Katelynn says she wouldn’t be where she is today without the support, she has received from all her family.

With a very successful amateur career, even at such a young age, Phelan explained why she had decided to turn pro. “Everyone said to me to stay amateur and you’ll go to the Olympics but I started to think for myself and decided professional boxing was more suited to me. In addition, my brother, Allan, is a pro boxer and I wanted to be as good as him.”

Phelan is under no illusions about the task that faces her on Saturday night. “Although we didn’t have as much notice as we might have liked for this fight, training has been going really well. When opportunities like this come up you cannot say no.”

To cope with the original lockdown after her fight in February Katelynn says she ended up getting a job but kept training away, sticking to her fitness regime and training as much as possible in Kildare town under the watchful eye of her Dad, Paddy. Since hearing about the fight, she has been training twice a day in her gym in Naas and in Brigid’s BC.

Phelan has been tapering off this week, sharpening up and making sure everything is ready to go for fight night. Her party will head out to Germany this Thursday, have a public work out and weigh-in on Friday and then fight in an outdoor roman like arena on Saturday night.

What would victory mean? “Oh, it would open massive doors, offer big opportunities. Maybe I could headline a show in Ireland and defend a title here. An Irish female boxer has never headlined a show here so I would love to do that,” the Phelan adds. “I wouldn’t be where I am without the support of my family and the wonderful support of my sponsors, Unit 3 Health and Fitness, Philly Kinsella of Strong Body Strong Mind, Nutriquick Ltd, Irish Biltong, Wilton Scrap Hire, ISAS Ireland, @hairbellegirls, @darmor17 and Infinity Recovery Room.”

What is she like before a fight? “I’m pretty calm really. I listen to music and although my coach Niall Barrett doesn’t like my taste in music, I listen to likes of Dolly Parton, Johnny Cash and Elvis. I’d love to meet Dolly Parton, she is amazing.”

Some of Dolly Parton’s love songs might pull on the heart strings but Kildare and Ireland’s youngest female professional boxer will be pulling no punches when she steps into the ring in Bavaria on Saturday night. The hopes of a locked down county will be on her young shoulders.