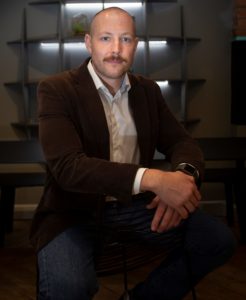 AN app launched in Kildare in 2018 to simplify casual labour in the hospitality industry almost doubled its database in May and June this year from 12,000 to 22,000 members because of the pandemic.

“‘Gigable’ has come to the rescue of local restaurants by helping them stay open during the COVID-19 lockdown restrictions,” said its inventor, former army officer and Newbridge resident John Ryan.

“It allows people work where and when they want to [but so] that business still has a lot of control,” he explained.

“They can post a [delivery] shift on the app, and any [member] driver can apply.

“The business can check his CV, how long he’s worked, but the driver can check the business also, as well as the rate of pay, before deciding whether he wants to take the shift as well,” he explained.

“They get paid through the app as well, and both [sides] can rate each other,” said Mr Ryan.

He started this in small measures with Eddie Rockets in Celbridge, before branching out to include their franchises in both Newbridge and Naas, and now also operates his app in Abrakebabra in Newbridge, as part of the 150 companies he has expanded into nationally over the last two years.

However, the numbers really boomed since the lockdown was initiated in March, and he believes that by simplifying the home delivery side of a business that might not have previously had such a service, his app has saved businesses in this most fraught period.

“This is a ground-breaking new ‘gig economy’ app which connects restaurants with freelance delivery drivers, and this has allowed many local restaurants in Kildare, who didn’t previously have a delivery service, quickly and easily launch food deliveries and keep their businesses afloat,” he points out.

‘’We’re certainly hoping that more and more restaurants in Kildare decide to go with Gigable. The second lockdown has been very hard for people in Kildare, especially for people worried about the future of their business and having to let staff go. It’s great to be able to help people through this.’’

Gigable recently also signed a partnership with Revolut which facilitates and streamlines a direct system of payments between freelancers and businesses, saving time and hassle for both.

In the final quarter of 2019, the company successfully raised a seed round of funding from Delta Partners, Enterprise Ireland and private investors.

Gigable will be embarking on a second round of investment funding later this year, and hopes to make inroads into the construction sector in the near future.

“A platform like ours is quick and convenient for the construction industry, but our core focus at the moment is keeping restaurants in business,” he stated.

“You can download the app and be driving tonight. The opportunities are there, and I’m proud to be able to provide that to people,” he concluded.

“You wouldn’t do it to a dog, to hit them and leave them on the side of the road”