ST Coca’s AC’s Paul Robinson continued his comeback trail after a long six-year absence from the track with a foot injury with a ninth-place finish in the 1500m at the Meeting D’Athletisme de Marseille last night. The Kilcock man finished in a time of 3:38:52. He was impressive in taking gold on the line from Sean Tobin at the National Athletics Championship in Morton Stadium on Sunday 23rd August. 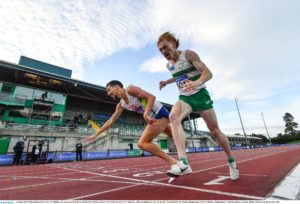 Robinson had to endure a long spell of injury following his fourth-place finish at the Europeans in 2104. These last two performances will surely give him the motivation to continue regaining the times he was achieving in the early part of his career.

Meanwhile in golf Conor O’Rourke of Naas Golf Club finished best of the Irish following the opening day of the Northern Ireland Open supported by the R&A at the Galgorm Spa and Golf Resort in Ballymena yesterday. The 29-year-old, who was coached by Gavin Lunny at Naas, shot an opening round of one-under-par 69 in windy conditions at the Antrim venue.

The left him five shots off the pace with the overnight leader, Julien Quesne, carding a four under par round of 66.

It was also a decent day for Brendan Lawlor who carded a 74. The Louth man recently teamed up with Carlton House Golf in Maynooth.