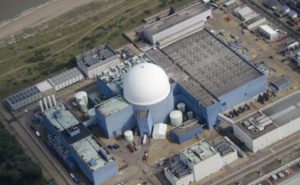 UNDER provisions made at the United Nations, submissions are invited from interested parties in Kildare to comment on the development of a new nuclear power station planned for the east coast of England.

Under the terms of the 1991 United Nations Convention, the Transboundary Environmental Public Consultation allows citizens in neighbouring nations have their say on certain public and private projects likely to have significant effects on the environment.

For this purpose, the member state of the UN in whose territory the project is intended to be carried out is required to send to its neighbours – no later than when informing its own public – a description of the project and any available information on its possible transboundary impact.

In this case, the Department of Environment, Planning and Local Government (DEPLG) was contacted by the British authorites in July about their plans to build a third reactor at the Sizewell nuclear power campus in Suffolk, to afford Irish citizens their chance to offer an opinion.

The letter from the UK’s Planning Inspectorate states that the Secretary of State has received an application to build two reactor units, giving a total site capacity of approximately 3,340MW, along with associated development required for the construction and operation of the Sizewell C Nuclear Power Station.

The proposed development has been identified as a project within the scope of paragraph 2 of Appendix 1 of the 1991 UN Convention and consequently, the UK Secretary of State has twice screened the proposal, once at pre-application stage and a second time on receipt of the application.

The screening determination on both occasions is that the proposed development is not likely to have significant adverse transboundary effects on the environment in this State.

However, the Secretary of State decided to notify Ireland as if the development is likely to have significant adverse transboundary effects on the environment in this

State, as provided for in the UN Convention.

All documents related to the application are available to view on the Department of Environment’s website, and at the Planning Department, Kildare County Council – but by appointment only.

Submissions made in relation to the potential transboundary environmental effects of Sizewell C may be made in writing to the Planning Department, Kildare County Council, Aras Chill Dara, Naas, Co. Kildare or by e-mail to [email protected] by 28 October.

All submissions or observations must be titled “Transboundary environmental public consultation – Sizewell C Nuclear Power Station”, and include the name and address of the person, authority or body making the submission, and must include reasons, considerations and arguments on which the submission or observations is based.