JAMES Eaton kicked the third of three Athy points in injury time as they came behind to win by the smallest margin in a thrilling game. 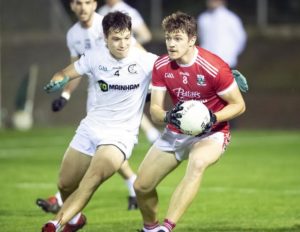 In the best game so far in this year’s Senior Championship so far , Clane gave as good as they got and were two points ahead going into injury time but perhaps it was Athy’s greater experience and know how in the closing stages that proved the difference.

This wasn’t the case of Clane almost catching Athy when they had an off day, in fact, Athy played some magnificent football in the first half and kicked some brilliant scores but Clane rose to that and responded in kind. The big question coming out of the first round following Clane’s huge win over Monasterevan was were Clane that good or were Monasterevan that bad? Well, tonight proved that they are a very good side indeed, unrecognisable from the one that only won a relegation final by a point in 2018. The defeat means they basically face a winners takes all game at the weekend against Castledermot in the race to join Athy in the knockout stages and they could be a very difficult opponent if they can safely navigate that awkward looking tie.

But of course, as well, it says a lot about Athy that they were able to grind out the win and this sort of victory will be a massive boost for them. Like the other three group favourites – Sarsfields, Moorefield and Celbridge – they have now won their first two group games and we could be set for a truly memorable finale to this Championship whenever it can be played.

The quality of this game was evident from early on and after Clane scored the first two points of the game, Athy answered back with five points in a row including some fine efforts from Niall Kelly, Kevin Feely and James Eaton.

Athy dominated the ball in the early stages but when Clane were able to force turnovers they transitioned quickly and they were back on level terms at 0-5 apiece after 15 minutes.

Kelly’s third of the half just before the water break put Athy back in the lead and they went three clear once Brian Maher and David Hyland found the mark after the resumption of play.

Clane finished the half well and almost score the goal of this year’s, or any year’s, Championship when Sam McCormack intercepted inside his own 45 and led the counter attack. As he made up the field at great pace, he linked up with McLoughlin and then passed off to his brother Shane. Shane McCormack’s final pass was aimed towards Kyle Devey and if had been six inches lower would have been an easy tap in but it was just out of Devey’s reach.

Feely kicked the last point of the half to leave Athy 0-10 to 0-8 ahead at the break and if anything, the quality of the game went up in the second half.

Certainly, Clane found another gear and at one stage, four points in a row put them 0-13 to 0-11 ahead, a point from centre back Robbie Phillips the highlight of that spell.

Athy were able to battle back and the teams were level at 0-14 and 0-15 but when McLoughlin scored two in a row in the last few minutes of normal time to put Clane 0-17 to 0-15 ahead it looked like they were heading for their best Championship win for a long, long time.

However, when the questions were asked, Athy just about had the answers and a Brian Maher point in the 61st minute followed by frees from Kelly and Eaton just about got them over the line.