Whatever your view on Daniel Flynn you can’t ignore the man. With Jack O’Connor watching on, Daniel was a constant source of entertainment in a one-sided Joe Mallon Motors Senior Football clash in St. Conleth’s Park on Saturday last. 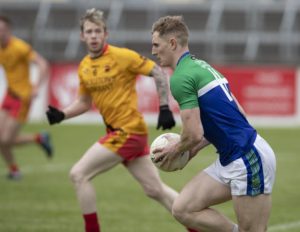 By half-time, the electric Flynn had provided three goal assists, rattled the crossbar, shot three wides, dropped one short, and had a decent claim for a penalty. A standard outing. He had St. Laurence’s porous defence on the rack.

As if Flynn’s return from a hamstring injury wasn’t a big enough boost for Bridge, they had Sean Hurley back in the starting line-up as well, and it’s no surprise their performance was transformed from the poor display against Sarsfields.

While Daniel provided the glitz, Sam Doran provided the graft and accuracy for Johnstownbridge, the former county under-20 player chipping in with seven points, six of them from play in a neat and tidy performance.

St. Laurence’s were on the back foot from the word go, and relied heavily on Padraig Fogarty for scores, particularly in the first half. Larries’ defence looked vulnerable against Eadestown last time and Johnstownbridge carved them open for five superb goals on the way to a facile win.

The first green flag came in the fifth minute as Daniel fed Shane Flynn for a cool finish to the top corner. Doran had earlier opened his account. Fogarty brought Larries into the game with three points in quick succession but for every step forward they seemed to concede a goal. The second came on 10 minutes from a sublime cross field ball from Daniel to Hurley, the big man burying it to Shane Connolly’s left.

Doran and Paul Cribbin added points before Fogarty brought his tally to five, leaving four points in it at the water break.

The O’Neill brothers drove through the heart of the Johnstownbridge defence, with Tommy finishing off the move with a goal from Adam Steed’s pass in the 18th minute. Bridge continued to edge it though and points from Cribbin again and two from Mark McCarthy helped them back into a three-point lead with Jason McHugh getting on the scoresheet for Larries.

McCarthy put daylight between the teams with the third goal in injury time, again benefitting from Daniel’s assist. McHugh, impressive for the losers, replied again to leave it 3-6 to 1-7 at the break.

The second half was pedestrian enough as the scoreline came to resemble a hurling match. Doran added five points to his own tally while goals in the 45th minute and the first minute of injury time sent Johnstownbridge to a comfortable seventeen-point win.

Daniel grabbed the fourth goal, rifling home after being fed by Hurley, and Niall Vaughan was on target with the final goal after good work by Doran and Paul Cribbin.

Daniel is back and Johnstownbridge are back in the race.