MAYBE the film, 48 Hrs, could never be described as a suspense thriller but the next 48 hours on the Kildare GAA championship scene should contain plenty of suspense and no little thrills.

It’s crunch time in the Joe Mallon Renault SFC with quarter final places to be attained and relegation battles to be avoided. Those quarter finals are expected to take place next weekend. 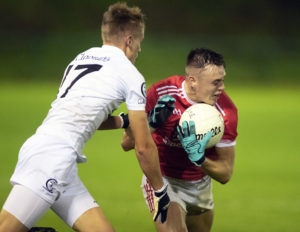 In Group A, thanks to that dramatic victory over Clane on Tuesday night, Athy are in pole position to take top spot and they should make no mistake against pointless Monasterevan on Sunday. Although Castledermot got back to winning ways last weekend, Clane, by virtue of their two performances to-date get the nod to take second spot.

Just as in Group A the top position in Group B should go to Moorefield. Ronan Sweeney’s men were pushed all the way by Maynooth last Saturday and they will find nothing easy against a Raheens team who were just pipped at the post by Carbury on Sunday but the former Leinster Champions should prevail. For their part Carbury drew on all their experience to overcome Raheens and that experience should be enough to see them beat luckless Maynooth.

Current County Champions, Sarsfields have been more than comfortable in their opening two games and should make it three from three when they play St Laurences on Saturday. The Larries are sure to want to prove that last weekend’s defeat to Johnstownbridge was a once off but Sarsfields are should carry too much power again.

Speaking of fire power, the masterful return of Daniel Flynn, saw Johnstownbridge rack up 5-17 last Saturday and they are likely to be in a similar form against an Eadestown side that remain pointless.

In what could possible be described as the Group of death only bottom club, Confey, appear to be out of the reckoning here and will surely enter the relegation battle. By virtue of their first round loss to Round Towers, Naas now find themselves in a battle for second place with Glenn Ryan’s team. It should be quite the contest between Celbridge and Naas and on the evidence of the first two rounds Celbridge would appear to have enough to succeed here leaving the county town team out in the cold as Towers should be too strong for Confey.