APART from Group D, the 2020 Pittman Traffic IFC is probably one of the most keenly contested in a number of years. Ballymore Eustace and Kilcock will decide who comes first and who will be second in Group D today but there’s a lot to be decided in each of the other three groups over the next two days. 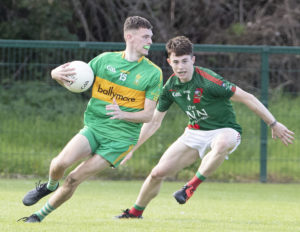 Ballyteague, driven by the point scoring of  Jimmy Hyland, are in pole position in Group A and although they will face stubborn opposition from Straffan, who are on two points, the Larks should do enough to remain top of the group. After a battling victory in Round 1 Suncroft, who are also on 2 points, were just pipped at the post last weekend and they have shown enough to clinch second spot by defeating a Kilcullen side that has failed to sparkle this year.

It couldn’t be any tighter in Group B with each team on 2 points and points difference is all that seperates them and even that is tight enough. Allenwood were disappointed to lose to Nurney on Tuesday night after their opening round victory and they’ll not find it easy against Sallins. who just lost out to Two Mile House on Saturday. Allenwood should make it though. Nurney will be buoyed by Tuesday night’s success but so too will Two Mile House after the narrow victory over Sallins. The House will be favourites to make the quarters.

The meeting of pre -Championship favourites, Clogherinkoe, and Leixlip should be the tie of the round and although Leixlip will give it their all they are likely to lose out and will likely have to settle for third place as St Kevin’s should carry too much for pointless Rathangan, after a struggle, no doubt.

This Group is the only one of the four that has already provided us with the two quarter-finalists as both Kilcock and Ballymore Eustace are each on four points. The only matter to be decided when the pair meet in Newbridge this evening is who will be top and who will take second place. Kilcock will be favourites to take top spot and they shouldn’t disappoint. In the other game Ellistown should do enough to overcome Milltown.