Oh what a night on Radio Castledermot 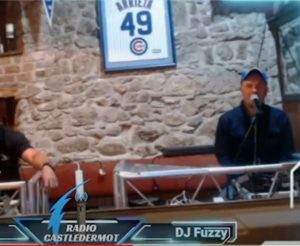 From Novia Scotia to Skenagun and from Brussells to Barnhill, Radio Castledermot reached new heights on Friday night as thousands tuned in for a very special Country and Irish show featuring Castledermot’s very own Michael English!
Kicking off the show at 7pm, John Kissane, fondly known as DJ Fuzzy, entertained the masses with some of Michael’s best hits as Michael got ready in the background. It was as Michael’s hit song “Ding Dong, Sing My Song” was blasting out that Michael suddenly entered the show with a radio mic and an energy that set the tone for the night. Once finished and everyone caught their breath, Michael took his seat beside Fuzzy for what was a really entertaining night for all who were lucky enough to tune in! He brought everyone through his musical journey from childhood to the present day and how he has managed the difficult lockdown period.
Michael then followed up his earlier tune with a memorable rendition of his beautiful song  A Million Memories.
One of the most popular and innovative features of the Radio Castledermot shows is the ability for the audience to see what is happening in studio and to interact with the presenters and guests. This was an ideal platform for Michael’s fans to send him messages in real-time and for him to see who was watching and read out their requests. Ever the pro, Michael ensured that he replied to everyone during the live show. As always on Radio Castledermot, there were plenty of giveaways and the huge number of entries to win one of Michael’s hit single Please say one for me ensured that Sinead Deering and Kayla Kissane were working overtime in the background to ensure they had everyone in the hat! Michael signed off the show by throwing on a Radio Castledermot T-Shirt and belting out his energetic hit Ten Guitarsas Fuzzy brought the curtain down on what was really a night to remember for everyone who tuned in and a testament to those who have worked so hard to get Radio Castledermot to where it is after six months.
Fuzzy’s love for Country and Irish music ensured he was the perfect host for the big occasion. Producer for the night was Thomas O’Connell and he was ably assisted in the background by Sinead Deering and Kayla Kissane who, as usual, was a vital part of the smooth running of the show. Leo Deering made sure Michael had everything he needed for sound and even gave up his seat for the night!

Michael finished off by saying “It’s wonderful to see something positive that has come out of these uncertain and strange times. There are people living alone, in nursing homes and in hospitals and it’s shows like this that helps keep people positive and gives them a little bit of company. It’s another companion, like an invisible friend and it helps keep people’s spirits up. What you have created here at Radio Castledermot is very special. Not only for the people of the village and surrounding community but as we saw tonight, for people around the world that joined us online”
The show will be available on YouTube this week so keep an eye on Radio Castledermot’s Facebook page for all the details!