NAAS made it two wins from two in the Haven Hire Senior Hurling Championship with a resounding and comfortable 4-19 to 0-12-point win over Confey in Manguard Plus Hawkfield on Wednesday evening. 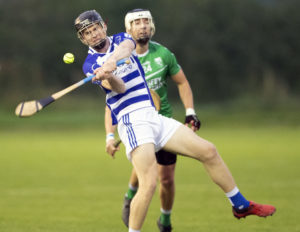 The accuracy of star-forwards such as Brian Byrne, Jack Sheridan, Shane Ryan and Conor Dowling, coupled with limiting Confey to just three points from play, ensured a rather straightforward 60 minutes for the men in blue and white.

Naas, playing against the wind in the first half, did the majority of their scoring in the second period but still held a five-point lead at the break on a score-line of 1-8 to 0-6.

Brian Byrne set the pace of the game, scoring 1-1 in the first 6 minutes, soon to be followed up by points from Shane Ryan, Conor Dowling and Sean Gainey respectively.

Confey’s response consisted of a couple of frees courtesy of Padraig Keegan and two points from play from Kieran Divilly, before Naas’ Jack Sheridan opened his account for the evening on 28 minutes. The two sides exchanged further points before half-time but Naas always looked in control.

They hit a further 3-11 in the second half, while their opponents only managed 0-6 points, all from frees; five from Padraig Keegan and one from Frank Bass.

In truth, the game petered out to an inevitable conclusion but the limited number of spectators in Hawkfield were treated to some exhibition hurling from the county champions.

The three goals came from Simon Leacy, Kevin ‘Titch’ Whelan and Conor Dowling, as Shane Ryan and Brian Byrne continued knocking over points at will.

Naas began to ring in the changes during the half and rested the likes of James Burke, Jack Sheridan and the aforementioned Ryan.

Having defeated Leixlip in the opening round, followed up by this victory against Confey, Naas show no signs of a hangover from last season’s success.