RAHEENS caused the biggest shock of the 2020 Senior Football Championship after beating Moorefield in an absorbing contest at St Conleth’s Park on Saturday. 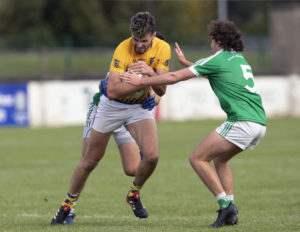 Liam Power in action for Raheens in the SFC  match against Moorefield Photo: Sean Brilly

DESPITE the shock nature it was a result that the Caragh boys fully deserved and it dramatically earned them a place in the Quarter-Finals on score difference ahead of the out of luck Carbury.

Goals in each half from the two best players on the pitch in Mikey McGovern and Liam Power grabbed the result for Raheens but it was their maturity in the final few minutes to see the game out that was most striking.

After Raheens led 2-9 to 0-11 the Moores reduced the gap back to one entering stoppage time and despite not playing well one still presumed they would dig out at least a draw like they always do but they never really threatened to score and that will have been the most worrying aspect for Ronan Sweeney and Co.

From a Moorefield point of view, it was a very worrying display ahead of the knockout stages of the Championship with their over reliance on Adam Tyrrell and Eanna O’Connor becoming more and more apparent.

Convenient then that it was a Moorefield man in Frank Hanniffy who contributed to the defeat and what a job Hanniffy has done in moulding a hugely exciting young side who are now primed for a shot at the County Champions, Sarsfields.

Raheens were like ravaged dogs from the start and they led 1-2 to 0-2 after ten minutes when a long ball from David Fitzpatrick caught Liam Healy off guard and for the third group game in a row Mikey McGovern found the net to give his team the perfect introduction into the game.

Moorefield replied in style as Eanna O’Connor with three points and Adam Tyrrell from play edged the Newbridge side in front. Still it was Raheens who had the advantage at the break with successive Alan Igoe frees giving them a 1-4 to 0-6 lead.

Moorefield were a tad unlucky in the opening minute of the second half when Aaron Masterson was fouled for a free but if referee Stephen Foley played the advantage a bit longer it would have resulted in Jason Phillips finding the net.

O’Connor still converted the free and he added another point from play a minute later to edge the Moores back in front. Raheens kept fighting though and when McGovern audaciously skipped by three Moorefield defenders before setting up Liam Power there was no question where the ball was going when the midfielder blasted a shot to the top corner past Tom Kinsella.

Alan Igoe and John Jennings followed up with points and Raheens were in prime position for a big upset. In typical Moorefield fashion the towel wasn’t thrown in yet though with O’Connor and Phillips reducing the deficit to a single point.

Still Raheens had an answer to everything Moorefield threw at them with Power, David Malone and sub Paddy Woodgate kicking fine points. Moorefield responded with Tyrrell and O’Connor kicking frees to bring the lead back to a point but they couldn’t force an equaliser with Raheens holding on to possession throughout stoppage time as they claimed a famous win.