Raheens are the surprise team of Championship 2020

In this week’s column in the Kildare Nationalist, out now, the Supporter casts a cold eye on the club football championship and is happy that it has thrown up some excitement over the last two weekends! 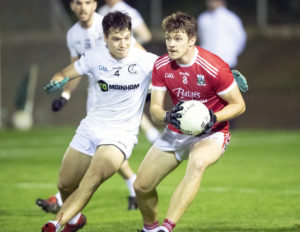 YOU would be loath to write Moorefield off. And probably damned stupid. Yet, there has been more than a hint over the last two weekends that we could be witnessing the dying embers of a glorious era burn out live on our laptop screens.

There is no dressing room wall available these days but Roli is welcome to pin this page to the perimeter fence alongside the green jerseys next weekend in Conleth’s. His team needs to find their mojo from somewhere.

According to my records only Sarsfields have beaten Moores in the group stages in the last five years. Maynooth were not a million miles from taking something from them last week, only a late Jason Phillips goal putting some gloss on a nervy performance. At the weekend they paid the price for their post-lockdown sluggishness as Raheens franked themselves as the surprise team of the competition (with respect to Round Towers).

At the outset let me say that Raheens have been magnificent in their three games and if anything were unlucky not to top the group (if they’d taken their first-half opportunities they’d have beaten Carbury the last day).

In Liam Power and Mikey McGovern, they have two of the standout performers of the championship and no doubt Jack O’Connor is keeping a close eye on his panellist Power whose (no pun intended) power and athleticism complement his football ability nicely and mark him out as a potential partner for Kevin Feely in the county side.

Moorefield were brilliant against Carbury before the local lockdown but when you look at the players they are missing these days it’s little wonder that they’re struggling for form.

Roli Sweeney is now directing options from the sideline while father time has caught up on Daryl Flynn and David Whyte. Eddie Heavey, Seán Healy, and James Murray are unavailable.

That is a lot of talent to cope without, even for Moorefield. The forward line seems to be lacking consistency as Roli tries to find a winning combination. Adam Tyrrell and Éanna O’Connor are in and out of games while the younger lads are not really putting their hands up as reliable starting forwards.

It seems crazy to say it after their abysmal opening performance against Sarsfields but I would love to see a fully fit Johnstownbridge going full pelt at Moorefield in the quarter final and seeing what transpires for them. Sadly, that vista seems unrealistic with Daniel Flynn again in trouble with his hamstring and Sean Hurley not fit enough to make the 30 for the win over Eadestown at the weekend.

Their absence and another week’s training for Moorefield should be enough to see them through. But they need to improve and quickly.

Sarsfields will meet a robust challenge from Raheens I imagine with the latter in bonus territory now really. Given the tradition in the club they may not see it that way but they should not feel any great pressure in what is really a free hit.

In common with the rest of the “Big Four”, Sarsfields were unimpressive in their final group match against a St. Laurence’s side who fought for every ball despite the absence of talisman Podge Fogarty.

When I saw Billy O’Loughlin’s selection, I wondered would the changes made send out an unintended message to his players about the importance of this game and it proved a real struggle for them. I can see his point though given the large panel at his disposal. I still think Sarsfields are in the best shape of anyone and clear favourites for the title.

What to make of Celbridge? And indeed Naas. It was hard to believe what you were seeing when Naas came out all guns blazing in the first half, storming nine points ahead with Celbridge rooted to the ground, unable to raise a stir. You would have thought it was they who had played on Tuesday night.

Cometh the hour cometh the man though (or men in this case). Fergal Conway was a brilliant save away from grabbing Celbridge’s lifeline goal before half-time but fellow county regular Mick O’Grady imperiously swept home the rebound with a finish Ronaldo would have been proud of.

That was enough to give Celbridge something to cling to at half-time and with Paddy Brophy shooting the lights out and Conway getting his goal in brilliant fashion, they had their county players to thank for snuffing out the Naas challenge.

Naas answered a few questions about their ability with some brilliant attacking football but the heart and gut need to match the skill and when Celbridge did get their act together the county town team wilted somewhat. The job of carefully melding the successful young lads into the team will no doubt ramp up a notch or two in 2021.

Athy took the Sarsfields approach of giving a few more players game time against Monasterevan and they too struggled for periods without ever looking likely to lose. They may have been suffering after the Clane game on Tuesday night, though, and they should have enough for Towers in the Quarter Final with a week’s rest. But they will get nothing easy against Glenn Ryan’s hard-working side.

Speaking of Clane, I was glad to see them come through the group, as with respect to Castledermot, they look more likely to give the more fancied teams a fright from here on. They play Celbridge and I think that will be another close-run encounter.

I can still see the four usual suspects moving into the semi-finals next weekend but it has been good to see the championship throw up plenty of excitement the last two weekends in each of the grades. The structure this year helps that.

Unfortunately, I have not seen much of the Intermediate Championship and none of Junior but from what I am hearing Clogherinkoe, despite that dramatic defeat to Leixlip, may still be the team to beat. That said, I am sure Two Mile House have a big performance in them next weekend.

Kilcock and Suncroft both put up big scores at the weekend but you would think Kilcock will have too much in that one. Likewise, Ballyteague are going strong and the wind was fairly taken out of Ballymore’s sails by Kilcock on Sunday, so you would expect Jimmy Hyland and co to progress.

It is Johnny Doyle against Tommy Moolick in a fascinating clash between Allenwood and Leixlip. I like the look of Allenwood’s attack with the likes of Darragh Malone, Eoin Bagnall and Johnny Byrne up there.

Young Doyle seems to be getting cranky in his old age. A rare (first?) sending off in midweek was followed by a yellow card on Saturday. But he still knows where the posts are. Allenwood get my vote.

In the Junior Championship congratulations to Athgarvan on their win over Cappagh, which I am sure made all the hard work getting back into championship football worthwhile.

Buckle in for the ride from here on, and stay safe,