Round 2 of the Haven Hire Senior Hurling Championship

WE barely have had a chance to draw breath following the weekend of drama and shocks in the Kildare Football Championship than we are back in Championship action again tonight, as there are three games down for decision in the Haven Hire Senior Hurling Championship.

The fourth tie, Ardclough V Eire Og Corra Choill, has been postponed because of a club bereavement. 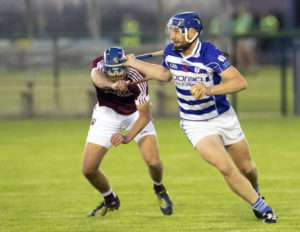 In the opening game at Manguard Plus Hawkfield defending Champions, Naas, take on Confey with a 7.30pm throw-in. Naas had a comprehensive seventeen point win over Leixlip in Round 1 and are showing all the signs of being favourites for the 2020 crown. With a scoring threat from Jack Sheridan, James Burke, Brian Byrne and Shane Ryan, who contributed 2-18 of the defending champions total of 2-21 between them, then they will cause a lot of problem for any team this year and will be very difficult to beat.

Three times county champions, Confey, have a very experienced side and they showed their mettle last time in withstanding a late Clane rally to win by six points. They too have scoring potency in Frank Bass, Padraig Keegan and dual player, David Slattery, but they also have a strong defence built around Paul Feerick, Anto Hoare and Kevin Chan.

Expect Naas to win but not without a fight and Confey will be looking for a good performance to show their intentions of reaching the business end of the championship.

It’s a 8.15pm start for  game two at Hawkfield, where Celbridge and Coill Dubh, both winners in Round 1, will be hoping to build on the momentum of 10 days ago. Celbridge will be favourites, and rightly so, as they overwhelmed Ardclough by 13 points last time out.

I’m sure county hurling manager, David Herity, would love to have Fergal Conway in his squad, nay on his team. Conway is in outstanding form for the footballers and hurlers this year. His ability to score crucial goals is a feature of his performances in both codes and everyone will be hoping that he stays injury free for county football duty next month. Conway will be ably assisted by Mark Moloney and Colman O’Donovan in the scoring stakes tonight.

Coill Dubh only played in patches against EOCC in Naas in Round 1 and they finished with 13 players following the dismissal of two of their best players, Johnny Byrne and Declan Flaherty, which weakened them on the night and into the future. They also leaked three goals when they seemed to be getting a foothold in that game. Mark Grace, Dylan Brereton, Conor Gordon, the Carews and Caseys will give their all but it is doubtful if that will be enough to stop the Celbridge march.

The excellent facilities at Cappagh will host the remaining fixture of the night, Clane V Leixlip, at 8.15pm. Both teams lost in Round 1 with Clane probably the most disappointed with the result as many were giving this up-and-coming team a good chance against Confey.Leixlip’s task was much harder against Naas and they will probably be quite happy with their performance, even in defeat.

For Clane, county goalkeeper, Paddy McKenna, will man the midfield while his county partner, Mark Doyle, will mind the net and McKenna, as Confey found out, will punish any indiscretions in front of goal. Given the right ball Bernard Deay and Christopher Bonus can hurt any team.

Leixlip gave a good account of themselves early on against Naas and they will be looking to build on that for the battle with Clane in the fight for runners up spot. They have lots of experience in the side in the likes of John Doran and Cathal Derivan while others to help their cause will be Cathal Melville, Patrick Murphy and Cian Bracken.

It should be a close affair but Clane may be that little bit further on and that might see them through.

Reports on all three matches on www.kildare-nationalist.ie