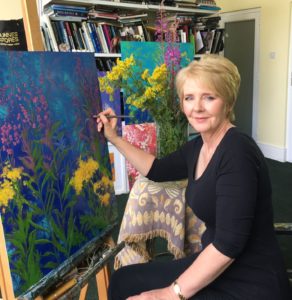 Straffan artist Kathrine Geoghegan at work in her studio 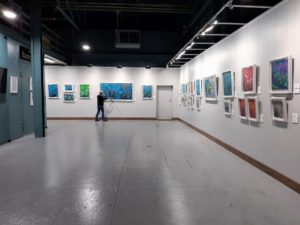 The exhibition hanging in the warehouse in Tallaght

A KILDARE gallery owner and a local artist have collaborated to defeat Covid – or at least its pesky restrictions – to host a first lockdown exhibition by holding it in a 6,000 sq ft warehouse normally used to manufacture train components.

“We were trying to think outside the box, and we thought of the warehouse,” said Breda Smyth, the owner of the Kilcock Art Gallery, Kildare’s only fulltime professional gallery.

The ‘we’ Breda was referring to was herself and Straffan artist Kathrine Geoghegan, whose exhibition of 43 paintings exploring the habitats of Bull Island – called ********Shifting Sands”*******- they will now show in the most novel way at the amply spaced Associated Rewinds warehouse on Whitestown Road in Tallaght Business Park.

The show opened at 11am today Tuesday, 15 September, and runs until 26 September, before Breda and Kathrine make a triumphal return to Kildare and a second show at the Kilcock Gallery on School Street from 1-17 October “where we can have people by appointment”.

“Kathrine came up with the idea for spacing it [in a warehouse], and her husband Peter found it. We’re really indebted to him,” said Breda

“We’ve hung the whole exhibition – all 43 paintings – and it looks fantastic,” said added.

“Kathrine paints a lot on aluminium, which takes a lot of preparation but comes out in a fabulous three-dimensional effect,” she added.

Unsurprisingly, this is not Breda Smyth’s first rodeo, and she celebrated the incredible 43rd anniversary of her gallery in Kilcock on 1 September.

“It’s certainly not the Left Bank, but we have the banks of the Royal Canal,” she said modestly about her gallery.

Originally from the town, Breda went to Mount Sackville in the Phoenix Park and then to the NCAD, before taking up a career in advertising.

She has seen off four recessions and managed to keep solvent despite al the challenges down through the years.

He gallery was a little bigger up until two years ago when Breda moved back to her home town and moved in “over the shop”.

“I can’t get away now, no matter what I do! But I love it anyway,” she smiled.

She also voiced her delight at getting back in her particular saddle – exhibiting artists.

Breda has developed a history with her exhibitors over the years now.

“Lots of my friends are old, but we started together. We’re all good friends and we stay friends, and I mind them as much as I can,” she stated.

And what next for the two women?

Well, after Kathrine’s last exhibition about bees and pollinators, and this one about the habitats of Bull Island, Breda believes her next adventure will be in the same vein, if a touch more local.

“I believe it’s about the bogs,” she revealed.

In the meantime, ********Shifting Sands********** will be officially opened by environmentalist Eanna Ni Lamhna on Tuesday, 15 September in Associated Rewinds warehouse on Whitestown Road in Tallaght Business Park.