“We can’t leave our taxi drivers behind” says Kildare TD 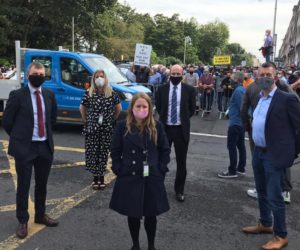 Kildare North Sinn Féin TD Réada Cronin ramped up the party’s support for taxi drivers forgotten by the government in their response to Covid19.

She made special reference to Kildare’s 754 taxis – between taxis, limousines and hackneys.

Speaking after thousands of taxi drivers protested in Dublin and ahead of Sinn Fein’s Dáil motion supporting them, she said: “Covid-19 has hit our taxi drivers hard financially. We have 754 drivers here in Kildare who we depend on. Despite being an essential service for us, many of them are now struggling to make ends meet.

“Evidence given to the Oireachtas Covid Committee shows that almost a quarter (23%) of drivers in the industry are aged over 66 and so not eligible for the Pandemic Unemployment Payment (PUP).
“This means many older drivers were forced back to work early during the pandemic, despite the advice being for older people to reduce their close contacts at that time. It’s cruel, dangerous and should be unnecessary,” she added.
“The collapse of international tourism and of the night-time economy has slowed business to a trickle. However, the government refuse to see this.
“Today, thousands of drivers are protesting, highlighting the huge frustration felt by the industry and calling on the government to put proper supports in place for them.
“The taxi drivers’ calls aren’t just for financial assistance, but for regulatory reforms that will help them weather this economic downturn.
“This would include a pause on the issuing of new licences until normal levels of economic activity return, reform of the Taxi Advisory Committee, continued access to bus lanes and a temporary two-year extension to the rule that requires taxis to be less than ten years old.
“Sinn Féin will put a motion to the Dáil tonight calling on the government to have meaningful engagement with driver representatives and introduce these reforms as a way to give taxi drivers a break and to keep our taxis on the road,” said Deputy Cronin.