CELBRIDGE are making light work of the Haven Hire Senior Hurling Championship’s “Group of Death”, adding the scalp of Coill Dubh to that of first round victims Ardclough in Hawkfield on Wednesday night. 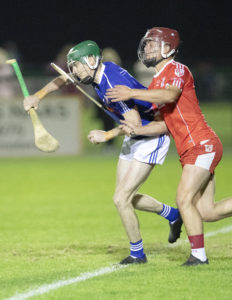 Niall O’Muineachain of Celbridge moves clear from the tackle of Conor Carew, Coill Dubh, during the SHC game in Hawkfield  Photo:Sean Brilly

While the winners are virtually assured of a semi-final spot, last year’s beaten finalists Coill Dubh are now facing a relegation battle after two defeats. Missing the suspended Johnny Byrne and Declan Flaherty, they were toothless in attack against a stubborn Celbridge backline.

Mark Moloney was the standout player on show, contributing twelve points to the winners’ tally, three of those from play, but Celbridge were strong all over with county footballer Fergal Conway grabbing his second goal of the hurling championship to add to the big ball one he scored at the weekend.

Only two Coill Dubh players managed to score with Conor Carew accounting for all but one of their points, eight of his nine coming from frees. That was symptomatic of their lack of cutting edge up front.

Celbridge’s first goal came after only five minutes with an incisive hand-passing movement involving Sam White and Tom Finnerty providing Patrick Leahy with the chance to fire past Aaron Fox. Moloney scored the first six points for Celbridge, including two monstrous ones from play. Conway scored 1-1 within a minute in the run up to half-time to put the winners out of sight, his goal a brilliant low drive from 20 metres.

Moloney and Carew continued to dominate the second-half scoring but the game became somewhat niggly as Coill Dubh’s frustration grew and it was no surprise when an “altercation” saw both Andy Shanagher of Celbridge and David Carton of Coill Dubh see red for second yellows.

Two teams on quite different trajectories.