Early goals do it for Clane

THREE first half goals followed by a rally of points in the second period allowed Clane to a double-digit victory over Leixlip in their Haven Hire SHC Round 2 encounter. 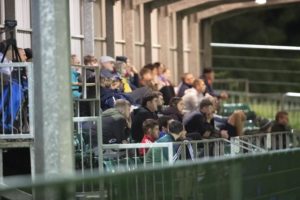 Despite a John Roche point opening the scoring it was a goal from Sam Hillyer that catapulted Clane into the lead after two minutes of action. But with the tie in its infancy Leixlip were determined to cling to the coattails of their more explosive opponents.

A series of exchange scores ensured that the deficit would remain at two until Patrick Murphy and Roche were again involved. Leixlip again regained the lead on the stroke of fifteen minutes before Stephen Ryan saw yellow for a high collision with Mark Doyle. Worse for wear Doyle was forced to call it a day as Paddy McKenna, an “able deputy” took up between the sticks.

With this his first action after stepping in he was to level the sides before Sean Christiansen again swung the lead.  Refusing to allow Clane out of sight three Murphy frees ensured that with four minutes left in the half they held a healthy two-point advantage. Clane, though, had other ideas and goals from Colm O’Sullivan and Bernard Deay in the dying stages of the half ensured that all of Leixlip’s hard work would go undone.

Buoyed on by their response Clane came out fighting in the second half and points from Simon Healy, McKenna and Hillyer had the advantage to seven within four minutes of the restart.

Looking to stem the tide of scores, Leixlip exchanged a brace of points with Clane. With no real power to build on these efforts, Clane smelled victory and again pushed forward to seal off a strong performance with a strong scoreboard. Healy and Deay again doing the necessary work in the full forward line before an Aidan Mooney point left nine separating the sides with twelve minutes still to play.

An Aidan Ryan point following a further point from O’Sullivan was all Leixlip could muster as Hillyer rounded off the scoring with Clane cantering to a handsome ten-point victory.