New J9a motorway junction to be open by Christmas 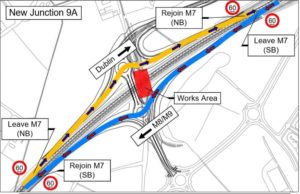 AFTER months of uncertainty and longing glances in passing at what looks like a finished interchange, the new junction 9a on the M7 will finally open within the next 100 or so days.

This was revealed at this month’s Naas Municipal District meeting, held earlier in the week (15 September) at Áras Cill Dara, following a motion from Cllr Carmel Kelly “that this council receives an update on the schedule of works for the completion of the Sallins bypass, including the opening of junction 9a”.

“The Sallins bypass and Osberstown interchange [as J9a is technically known before opening] are due to be complete by the end of the year providing no unexpected delays occur,” confirmed Pamela Pender from the Roads Section.

Cllr Kelly noted the mild asterisk of caution at the end of Ms Pender’s formal reply – “due for the end of the year, but providing there’s no unexpected issues?” – but allowed herself an eventual half-full glass.

“But I suppose I can dream of a Christmas bypass!” she said.

The much-awaited J9a is the final part of €110m Sallins bypass, and will help alleviate a lot of the traffic pressure off the Ball (J9) and the Bundle of Sticks (J10) entrances to Naas.

This issue was last raised with no clarity at the June meeting when Cllr Bill Clear enquired about the still-fenced off exit onto the M7 just before the Kerry HQ out the Millennium Park Road, which he – and a lot of his constituents – believed was completed.

However, then he was informed that because this junction was part of the Sallins bypass and not the M7 widening project, it would not open until the bypass was finished.

Earlier this year it was hoped to have J9a opened by July, but like so many things in the world, it got a bit pandemic postponed.