Are the top four in danger in the last eight

After the final round of fixtures last weekend many are questioning if that “cosy cartel” is about to be broken up after the performances of Johnstownbridge, Round Towers, Clane and Raheens in qualifying for the quarter-finals. 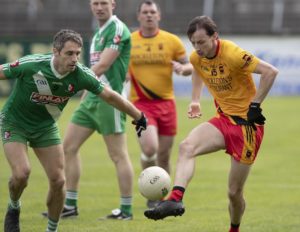 Championship action from last weekend in Newbridge                               Photo: Sean BrillySarsfields were less than impressive in their defeat of St Laurences, albeit that Billy O’Loughlin “rested” some of his players, especially in the first half. Nevertheless, they had to pull out all the stops to remain undefeated in the Group Stages.

Tomorrow the defending champions will face a Raheens side that has been a breath of fresh air in Championship 2020 and caused a major upset by defeating Moorefield a week ago. It might have been a shock but it was a deserved win.

Sarsfields are a hugely experienced side with the likes of Con Kavanagh, Conor Hartley, Matty Byrne, Gary White, Ray Cahill not to mention Daragh Ryan and Alan Smith who started on the bench on Saturday last. Raheens are no slouches either and can point to Declan Campbell, Tom Early, Tom Dore, Graham Watters, David Malone Mikey McGovern, Paddy Woodgate, not to mention the star performer in this year’s championship, Liam Power, as being players who can match it with anyone.

Have the Caragh men enough off the bench to match that of the Newbridge men? Can they sustain their performances for a third week in a row? Those may be the questions that could decide the outcome on the day and based on those doubts defending champions, Sarsfields, get a hesitant nod to reach the semis, but only just.

Was Saturday last just a one “off day” for Moorefield? Certainly, coupled with the previous week’s struggle Roli Sweeney and his management team must have concerns as they face high-scoring Johnstownbridge in the opening quarter final. Eanna O’Connor and Adam Tyrell have shared the scoring burden for the Moore’s of late and they will need more support throughout the field to ease that burden. I’m sure there will have been much soul searching from the former Leinster champions and they will need to recapture that winning spirit again if their run is not to end pre-maturely. The absent James Murray epitomised that spirit.

Johnstownbridge have been a revelation over the last two games racking up big scores in their recent victories. The performance of Daniel Flynn, both as score getter and provider, has been hugely instrumental in those victories and in those high scores. Regrettably for club and county, Flynn went off injured last weekend. Was it just a precaution? The absence of Flynn, in the devastating form he is in, coupled with the possible absence of Sean Hurley, would be a serious blow to JTB’s chances despite what Sam Doran brings to the table.

Moorefield to regain their mojo particularly if JTB are missing Flynn and Hurley.

The Sunday lunchtime meeting of Celbridge and another surprise package, Clane, should prove an exciting fare and the limited number of spectators should get great value for money. As expected Celbridge were never going to get it easy from a Naas side that was fighting for its championship life. What wasn’t expected, though, was the poor first half from the Hazelhatch men. Mick O’Grady’s goal just before half time was the tonic they needed and the second goal from Fergal Conway, a man who is performing out of his skin for the footballers and hurlers, helped Celbridge to the narrow victory.

O’Grady and Conway are but two of the men that Celbridge can call on as Paddy Brophy, John Costello, the experienced Hugh McGrillen, and Tony Archbold can punish any side.

Clane were unlucky to lose to Athy 10 days ago but that experience didn’t do them any harm when the chips were down against an improving Castledermot on Sunday. Sean O’Dea’s men contain some exciting talent in Brian McLoughlin, Cian O’Donoghue, Shane O’Sullivan and Sam McCormack.

This may be a year too early for the men from Conneff Park and Celbridge may just carry that bit too much experience for them on the day in a tight affair.

Athy have been beavering away quietly and remained unbeaten through the Group Stages of the championship without any fuss. They too are a very experienced side with players like Mick Foley, Paschal Connell, Kevin Feely, Liam McGovern, Darroch Mulhall, not to mention Niall Kelly, who can share responsibility on any given day.

Glenn Ryan’s Round Towers, and it’s appropriate that we should call them such, as they are moulded in the former county’s Captain Fantastic’s indominatable spirit and determination. Towers caused the first shock of the championship by beating Naas and just like Raheens last week, that victory was fully deserved.

James Robinson is a good keeper with a good kick-out strategy and he is good at finding men like Mark Byrne and Mark Waters to set up their attacks. Jason O’Brien, Matthew Kelly and Stuart Murphy are accurate in front of goal and need careful watching.

Again, it will be a close affair but once again Athy’s greater experience should be enough to get them into the semis.

Looks like it will be the top four again but if it is then this could well be their last year as Clane, Raheens, Johnstownbridge and Round Towers and knocking on the door. There’ll be trouble for any of the top floor who might leave that door ajar